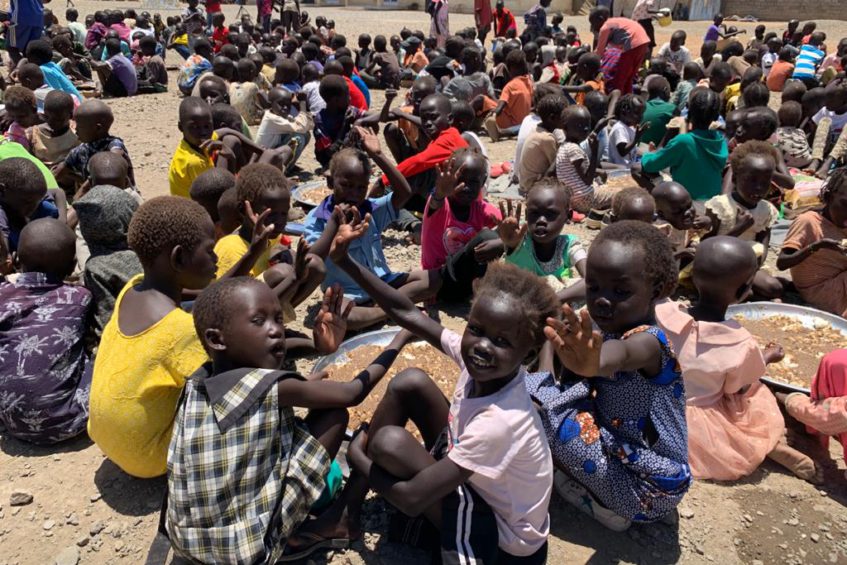 Orphans share a meal at Stone International Church in Juba where they shelter at night. Majority of them roam the streets during the day and return to the church compound in the evening| Credit | Priscah Akol/Eye Radio

Nearly 500 orphans are in urgent need of food and sleeping materials at Stone International Church in Juba.

The children who are in the custody of the church do not have sleeping mats or blankets and have no medical supplies.

When Eye Radio visited the church on Sunday, most of the children were sleeping on the floor.

Some had not eaten for the day. Others have been at the premises since 2014.

Some of the children said they lost touch with their parents since December 2013 when violence erupted across the country.

They have since lived on the streets of Juba begging for food and where to sleep.

The caretaker of Stone International Church in Gudele, Block 4 confirmed that the majority of them are street children.

Jacob Mijok disclosed that the children often come to the church in the evening to seek shelter and escape from the streets.

“When rain comes, the young ones – between the ages 5 to 10 – squeeze themselves in a small room,” Mijok told Eye Radio.

But, he said, the church cannot feed them enough either.

Reports indicate that the vast majority of children in South Sudan have been orphaned as a result of extreme poverty, ethnic conflicts and HIV/AIDS.

The United Nations’ Food and Agriculture Organization, FAO, says hunger –fueled by a protracted civil war and a failed economy –has pushed children into labor or life on the streets.