Established in 2018, the NRA is mandated to assess, collect, administrate and enforce laws relating to taxation and revenues.

The establishment is one of the measures to reduce dependency on oil revenues, strengthen non-oil revenue sector and strengthen expenditure control required to achieve short-term fiscal austerity objectives.

The Treasury Single Account, where all government revenues are collected, was opened and became operational in December 2018. Prior to this, taxpayers’ money used to be diverted into accounts that were opened and managed by some senior government officials.

Its first commissioner-general was fired in August over alleged fraud, an allegation Dr. Olympio Attipoe denied.

Before his dismissal, he reformed the public institution by mobilizing NGOs to pay taxes for items that have not been waived, and publicly advertising positions of commissioners – including asking the existing ones to apply, saying “being a general or Soldier doesn’t mean you automatically work for NRA”. He also ensured that all the taxes collected were announced monthly. Since his removal from office, non-oil revenue collections have decreased.

In September 2019 and October 2019, revenue collections decreased to just about $ 2 million and SSP 500 million, respectively. This amounts to an unexplained non-oil revenue decline of over 60 percent.

In October, the Acting NRA Boss, Erjok Bullen Geu, said the authority would no longer be announcing the monthly collections – claiming it was wrong in the first place, adding that the revenue authority had no power to do so.

“The former CG [Commissioner General] was announcing what we collect every month, this is not allowed by law,” Bullen told Eye Radio in Juba. Thus, the public has been kept in the dark since then.

However, Eye Radio has found that the non-oil revenue block account at Stanbic bank has been witnessing transactions that are not in compliance with the NRA ACT 2017 and R-ARCISS 2018. As stipulated in the National Revenue Authority Act 2016, the NRA gets not more than 2 percent of total non-oil revenue collections for its operations.

However, funds transfer documents from Standbic bank show that more than 84 percent of total non-oil revenue collection in September 2019 was transferred to the NRA Operation Account in utter contravention of the NRA ACT 2016.

According to the bank documents Eye Radio has obtained, Bullen has approved transfer of taxpayers’ money from the Block Account Number: 0200000172935 (Stanbic Bank Kenya Limited) to NRA Account Number: 0026921.2218157. 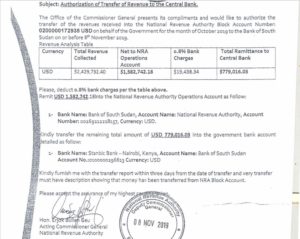 It’s not clear under which legal mandate did Bullen transfer more than 2 percent of the total monthly revenue collections in September and October 2019 as seen in the transfer documents.

Note: According to Chapter IX, sub-section 40 (1) (b) (i) of the South Sudan National Revenue Act 2016, only up to two percent (2%) of the non-oil revenue collections can be transferred to the operating account of the National Revenue Authority. However, over 84 % and 65 % of non-oil revenue collections in September 2019 and October 2019, respectively, have been transferred to the NRA operating account without due process of the law and in utter contravention of the NRA 2016.

The question is, who authorized Bullen to take more than the law requires? Another question that lingers is: where is the money going?

A classified source in the Bank told Eye Radio the NRA Operation account balance read zero by the time of this publication.

Before his appointment in March 2018, Erjok Bullen Geu was a senior official at the National Security Service. At the time of his transfer to the NRA, he was the director of admin and finance for NSS.

“…the Deputy Commissioner–General may not act for more than sixty consecutive days without the approval of the President,” partly reads the NRA Act.

Bullen has been acting since August 23, which clearly shows violation of the Act, considering that President Kiir has not issued any public approval.

Corruption in South Sudan is said to be among the worst in the world. The nation’s elites have developed a kleptocratic system that controls every part of the South Sudanese economy, according to corruption reports, including the recent The Sentry’s The Taking of South Sudan.

Before his dismissal, NRA Boss Dr. Attipoe threatened to name some senior government officials who were opposed to reforms.

This came after he learnt that some senior tax collectors were conspiring with certain commercial bank operators to divert tax revenue into private accounts.

Dr. Attipoe’s sacking angered some members of the public who questioned where the minister derived the powers to terminate Attipoe’s services.

The Ghanaian national was appointed by President Salva Kiir in 2018 through an agreement with the African Development Bank.

When contacted by Eye Radio, a civil society leader wondered whether Dr. Attipoe was intentionally removed in order for such illegal transfers to thrive.

“The dismissal of the NRA former boss offers great concern for the issue of corruption and lack of transparency in the national revenue management,” said Edmund Yakani, executive director for Community Empowerment for Progress Organization.

Yakani appealed to the National Audit Chamber led by Steven Wundu to “keep an eye” on the activities of the National Revenue Authority.

ICC prosecutor to visit Sudan to discuss case against Bashir