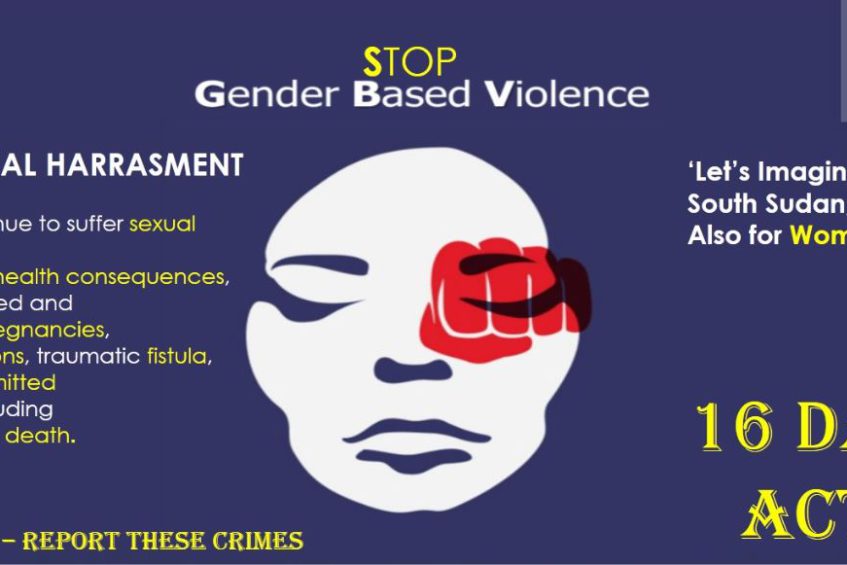 As the World marks the 16 Days of Activism Against Gender-Based-Violence, an official at the Ministry of Education is calling for an end to all forms of violence against women in South Sudan.

The 16 Days of Activism is an international campaign and strategy for the elimination of all forms of gender-based violence.

It was initiated in 1991 by the first Women’s Global Leadership Institute.

Since then, more than 6,000 organizations from approximately 187 countries have participated in the campaign.

The global theme for this year is; “Stand Against Rape.”

The major forms of sexual violence recorded in South Sudan include widespread and premeditated gang rape and murder of women and children.

In 2018, the UN Mission documented 238 conflict-related sexual violence incidents, involving over one thousand victims, the majority being women and girls.

The report revealed the most common violation as being abduction for sexual slavery, followed by rape and gang rape. Other violations included attempted rape, forced marriage and forced abortion.

According to the recently released 2020 Humanitarian Needs Overview among the reported gender-based violence incidents recorded in 2019, World Vision recorded physical assault perpetrated by an intimate partner accounted for 37 per cent, sexual violence 18 per cent, and emotional abuse 25 per cent.

The organization defined rape as a very specific form of violence against women and girls, rooted in complex issues such as a deep-rooted harmful social norm, gender inequality, and power imbalance.

World Vision noted that support is crucial for women to rise above the traumatic experience of rape and other forms of sexual violence.

It called for a commitment to supporting survivors, preventing violence from occurring in the first place, and realizing equality in family relationships, homes, and communities.

Several reports have urged the Government of South Sudan to quickly investigate all incidents of sexual violence and hold perpetrators accountable, regardless of rank.

Speaking to Eye Radio on Monday morning, Esther Akumu, director-general for Gender Equity and Inclusive Education at the Ministry of Education, agreed that sexual gender-based violence requires a prompt response.

“For us in South Sudan, we are saying we should join hands to stand against rape which has been very common in South Sudan and we really need to get rid of it,” she stated.

To end the impunity with regards to sexual gender-based violence in South Sudan, the UN urges the government to provide comprehensive services to survivors, extend services into remote locations and to grant full access to humanitarian organizations assisting victims and displaced civilians.

It further said South Sudan should ensure that conflict-related sexual violence is addressed as a central aspect of the revitalized peace agreement, including by ensuring that crimes of sexual violence are not condoned and that victims receive reparations and livelihood support.

A series of events have been planned in Juba to raise awareness on the 16 Days of Activism against Gender-based violence.

The UN Mission in partnership with the government will host a “Family Open Day Festival” in Juba on Thursday for parents and students to raise awareness about the 16 Days campaign and promote the revitalized peace process.

The one-day event will include sporting activities for children and parents, music, comedy, drama for peace and cultural performances at Jubek Model Martyrs Secondary School.