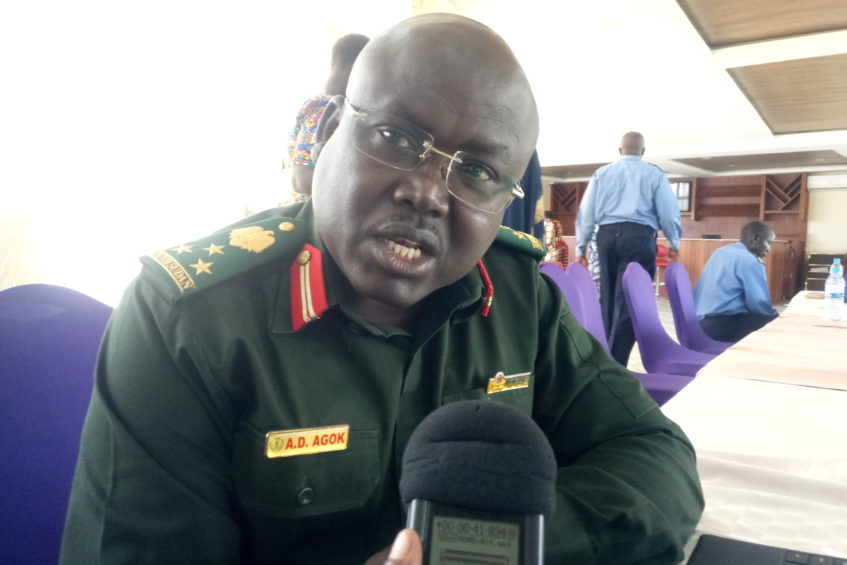 The army is investigating the circumstances in which eighteen children have been associated with their forces in Lakes state, the South Sudan People’s Defense Forces has said.

Recently, there has been an allegation suggesting that eighteen children have been recruited into the SSPDF ranks at Panda Barracks in Rumbek.

The children are believed to have come from Lakes, Northern Bahr el Ghazal and Warrap states.

In July this year, the head of SSPDF Child Protection Maj. Gen. Chaplain Khamis Edward told Eye Radio that the number of children associated with armed forces in the country has reduced.

Brig. General Angelos Dhal Agok, the deputy Director of SSPDF Child Protection says a team from the SSPDF headquarters has been sent to Rumbek to investigate the matter.

Brig. General Dhal was speaking on Thursday during a high level roundtable discussion on the implementation of the Comprehensive Action Plan to end and prevent grave violations against children in South Sudan.

“When this report came out, we acknowledged that since we received 18 actual names and our partners and our focal point went there to verify. We want to know how these children enter our barracks. We received this report last week and so we are investigating it now,” Gen. Dhal said.

“For several years now, we have been working with Dallaire Institute, with UNICEF and with the DDR Commission and we ensured that we did not have children. Our CDF sent out a message to all units informing them to not allow children to be associated with the SSPDF.”

For his part, Oluku Andrew Halt, the National Coordinator for the Release and Reintegration of Children at the DDR Commission stated that they too are aware of the report.

“We have some allegation of eighteen children who were found in Rumbek and our team on the ground, the DDR Commission with support from UNICEF and UNMISS went and verified they are eighteen,” the DDR official said.

In 2019, the UN children’s agency – UNICEF said there were about 19,000 children associated with the armed groups in South Sudan.

Between 2014 and 2018 about 4,000 children were released and reunited with their families, mainly in the former Buma, Gbudue and Unity states.

But in February last year, the South Sudan government – with support from partners – signed a comprehensive action plan to end and prevent all grave violations against children in the country.

The six grave violation against children include, recruitment and use of child soldiers, killing and maiming, sexual violence and rape.

Others include, attack on school and hospital, abduction and denial of humanitarian access among others.