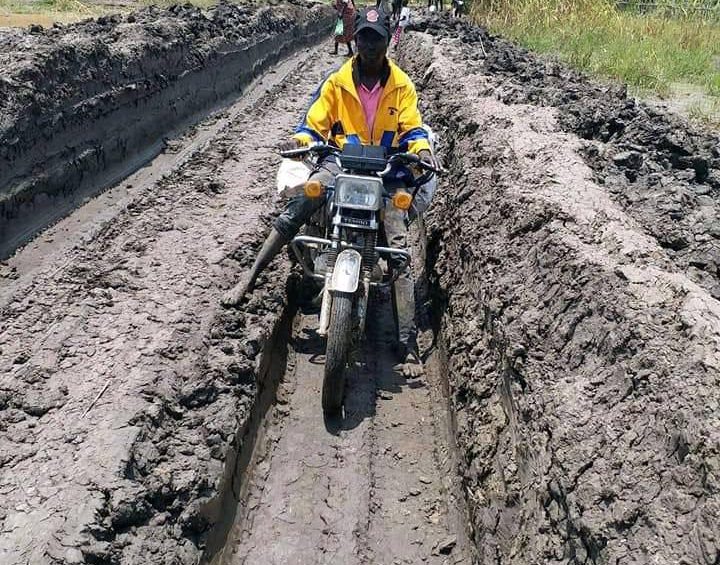 A motorcyclist rides on Anet-AByei road in Sept. 2019. Most dirt roads in South Sudan looks like this during rainy season | Credit | Tino Matoc

More than 100 trucks on transit to greater Bahr el Ghazal have reportedly been stranded in Yirol town for weeks due to impassable road.

Eastern Lakes State Minister of Local Government explained that that due to the floods, the trucks cannot pass the roads there.

Simon Tueny Mabor stated that some of the stranded trucks belong to aid agencies taking humanitarian assistance to Rumbek, Wau and Aweil.

“The road is truly impassable. A lot of UN trucks are now packed in Yirol town,” Tueny told Eye Radio on Tuesday.

Since July, severe flooding across the country has affected an estimated 900,000 people.

Following the floods, President Salva Kiir last month declared the State of Emergency in 27 areas to coordinate responses to the flood victims.

Minister Tueny said from Yirol town yesterday that humanitarian assistance cannot go beyond Eastern Lakes because of the inaccessible roads.

“The road from Terekeka and Yirol is passable but from Yirol to Aluak-Luak is not,” he said.

The UN Office for the Coordination of Humanitarian Affairs says more than 60 per cent of the flood-affected areas in South Sudan are currently classified as facing extreme levels of acute malnutrition.

A road construction agreement between China and South Sudan is expected to end such a yearly problem.