Cattle should not be a curse, but a blessing – FAO 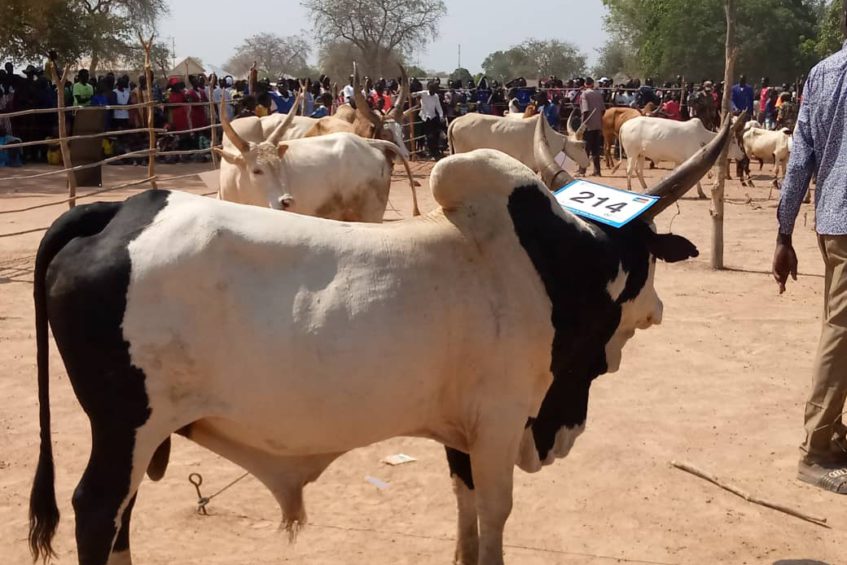 The organizer of Kuajok’s Livestock-Agriculture show has said cattle should not be considered as a curse but a blessing to the people.

It’s believed that thousands of people have lost their lives in incidents related to cattle raiding across the country.

According to FAO Livestock Information Officer, Kang Chol Kang, the show and exhibition was aimed at educating and creating awareness among the communities there.

At the show, livestock keepers showcased their goats, sheep and cattle for evaluation by judges who were earlier trained by FAO and the U.S. Civil Affairs veterinary team.

The animals with the most desirable productive traits were later awarded prizes.

The winners of Thursday’s competition walked away with between 29,000 to 60,000 Pounds.

Kang, who was also the Ringmaster of the competition, told Eye Radio at Kuajok on Thursday that cattle are a blessing.

“We encourage people to have animals that will produce more milk instead of having a huge number of cattle that give little milk,” Kang said.

“This is an encouragement, as you can see, there is a peaceful interaction among farmers, and they are very happy. This is what will promote peace. We need to carry on with this event so that people can interact.

“Cattle should not be a curse but a blessing.”

The event was attended by senior government officials, including the Minister of Livestock and Fisheries, Onyoti Adigo; Deputy Governor of Warrap State, Debora Odual.

Others were members of the diplomatic mission ambassadors including those of China and Norway and the USAID Director in South Sudan.

Also in attendance were representatives of the Food and Agricultural organization, deputy ambassador of the UK and representative of Canada.

Hundreds of Kuajok residents and some representatives from neighboring states of Lakes and Northern Bahr el Ghazal participated in the event.

According to UN agencies, South Sudan is one of the richest countries in livestock wealth per capita in Africa, boasting more than 40 million livestock.