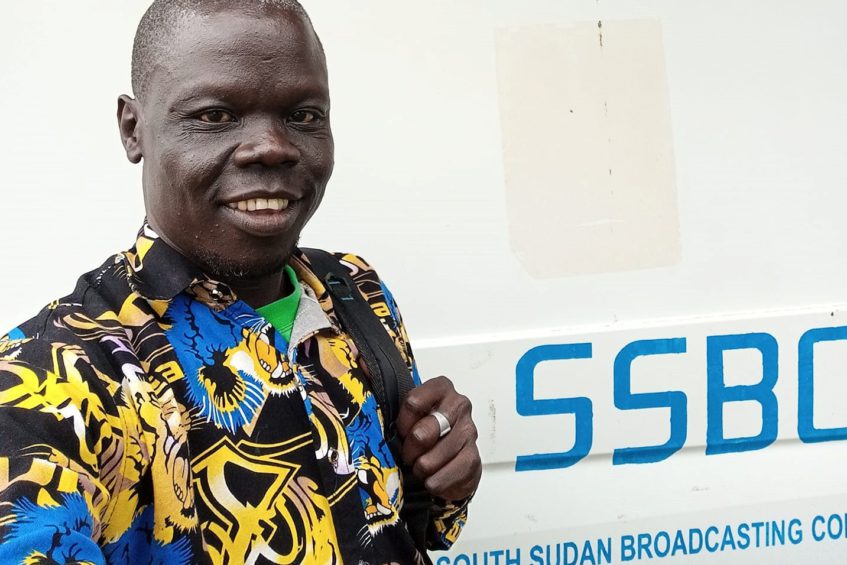 The Union of Journalists of South Sudan said Alfred Angasi was detained by National Security for reportedly refusing to anchor news. Photo:facebook/Alfred Angasi.

The family of a journalist allegedly detained by the National Security is demanding his release.

Alfred Angasi Dominic who works at South Sudan Broadcasting Corporation as a news anchor was arrested on July 2, 2021.

His sister, Cecilia Dominic confirmed to Eye Radio that her brother Angasi was picked by National Security from SSBC headquarters in Juba nearly two weeks ago.

She criticized the management of SSBC for “keeping quiet” about her brother’s detention.

Ms. Cecilia is now calling on the National Security Service to release her brother, raising concerns about his health.

“He recently recovered from an illness, even doctors directed that he should not be in a cold place and not to eat some type of food,” she revealed.

“We as a family wish that SSBC would take action, but as long as they did nothing, I would ask the Union of Journalists and all other parties to look into the matter of my brother and release him,” Ms. Cecilia told Eye Radio on Saturday.

The reason for the journalist’s continuous detention is not known.

But in a press statement issued on 16th July, the Union of Journalists of South Sudan said Alfred Angasi is being detained by National Security for reportedly refusing to anchor news.

UJOSS said journalist Angasi was briefly released on July 4, but re-arrested on July 5. To date, Angasi is still under detention.

According to UJOSS, the administrative issues that led to the journalist’s detention should have been handled at SSBC but not the National Security Service. This, it said, shows an overlap of authority.

“We are concerned that if really he is suspected of example committing a crime that we do not know about, then the right place to take him is a competent recognized court according to the constitution of South Sudan so that he is produced before that court and he is formally charged,” he added.

The UJOSS president said they are working with other agencies, including the National Security to ensure there is a mutual understanding for the release of the journalist.

When contacted several times, the Managing Director of SSBC, Magok Chillim confirmed Angasi’s detention, but said he could not comment on the matter.

IGAD told to bring Riek and Gatwech to the table