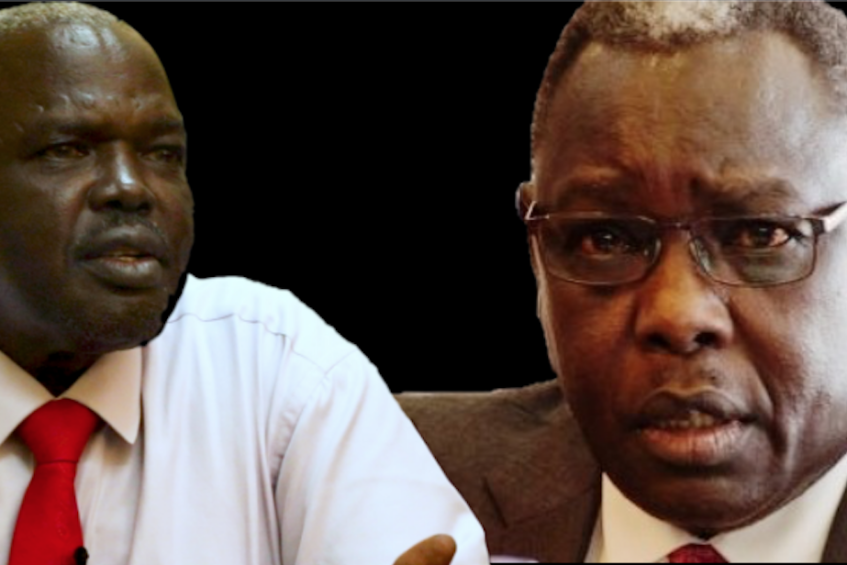 The national Minister of Cabinet Affairs and the Governor of Upper Nile state have pointed fingers at each other over the controversial decision to move Makal County headquarters to Wau-Shilluk.

The two have shared conflicting narratives on who really advocated for the changes in Malakal town and Makal County, but also acknowledged the decision was necessary.

Dr. Martin Elia Lomoro was said to have suggested the relocation of Makal County headquarters from Malakal.

“Dr. Elia Lomoro said the headquarters of Makal County should be Wau-Shilluk Payam, and Wau-Shilluk is one of the Payams in Makal,” Governor Budhok Ayang claimed.

But Dr. Elia has denied the allegation.

“The resolution of the meeting was released by them; the governor, his deputy, his [Budhok] chairman Dr. Riek Machar who chaired the meeting,” Dr. Elia Lomoro said in response.

The meeting was also attended by the new governor of Upper Nile state, Budhok Ayang and his deputy James Tor.

The decision to move the County headquarters out of Malakal town has been met with serious resistance by local communities and politicians from the area.

Some describe the move as a violation of the revitalized peace agreement and the state constitution, including a decision made by the late Dr. John Garang in 2004.

The constitution and the revitalized peace gives the power to change local boundaries to the Council of States.

While Dr. John Garang in 2004 decided that Malakal town shall be the administrative centre for Upper Nile state and Makal County –just like Juba city.

In an interview with Eye Radio, Governor Budhok said his preference is for the communities inhabiting Makal and Malakal to determine their administrative centre.

In response, Dr. Martin Elia said it was a collective decision of those who attended the meeting.

He wondered how a meeting chaired by Dr. Riek Machar could have been influenced by him or any individual person.

“Nothing that was reached was of any individual conclusion. Actually, it was Riek Machar who in the end proposed that, yes, add the centre to be in Wau-Shilluk.”

The Office of the First Vice President is yet to make a public statement on the matter.

The meeting of the five leaders had settled that Makal County shall be comprised of Warjowk Payam, Lilo Payam, Ogodo Payam and Wau Shilluk Payam as its head headquarters.

It further decided that Malakal shall be the Municipality comprising of Malakal north, Malakal centre and Malakal south.

They said the decision was reached after verifying documentation and soliciting the views of the governor and his deputy.

Activists have called for the reversal of the decision fearing that it will escalate tensions among communities inhabiting areas near Malakal.