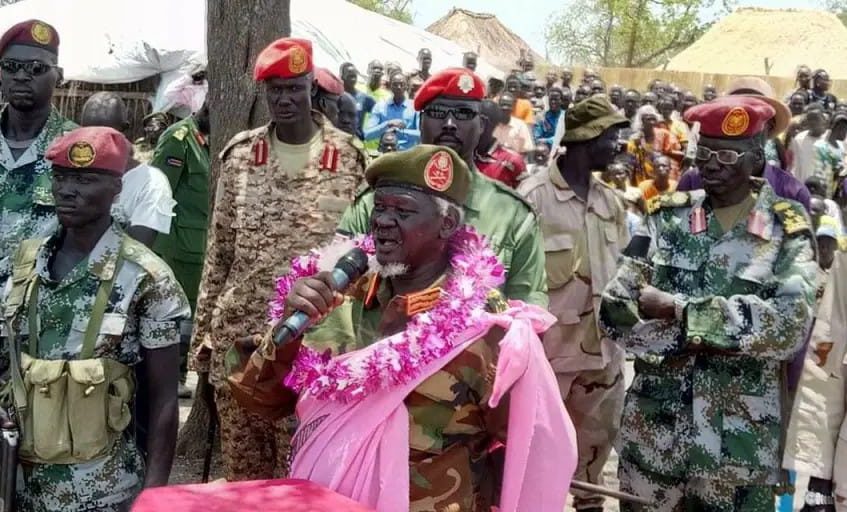 First Lieutenant General Simon Gatwech Dual has declared himself the interim chairman and commander in chief of the SPLM/A-IO.

The proclamation by the SPLA-IO Chief of Staff is said to be borne out of “a long frustration” over the leadership style of First Vice President Dr. Riek Machar, and the lack of implementation of the security arrangement.

A three-day meeting of field commanders organized in Meganis at the border with Sudan this week resolved to dismiss and strip Dr. Riek Machar of the leadership position of the peace party.

“He [Machar] no longer represents the interest of the wider population in South Sudan – as he has become a part of the national government, compromising fundamental issues, hence his views are not helping the movement [SPLM/A-IO],” they said in a statement on Tuesday, August 2, 2021.

The military commanders also recommended General Gatwech take over the role of First Vice President of South Sudan under the revitalized peace deal.

“The military command leadership has task 1st Lt. Gen. Simon Gatwech as the interim chairman and commander in chief of the movement -immediately he will be the First Vice President,” said the group spokesperson, Brigadier General William Gatjiath Deng.

The conference also dissolved the SPLM-IO Political Bureau and the National Liberation Council.

It recalled all politicians in Juba and military officers assigned to the various peace mechanisms to immediately report to Kit-guang Meganis for further consultations.

The conference labeled several accusations against Dr. Riek Machar including nepotism, dictatorship, loss of vision, abandoning and ignoring the plight of SPLA-IO soldiers at the cantonment sites, and self-centered politics.

“Even the way he selected the ministers and members of parliament did not reflect any reform agenda, but a personal ego to achieve his political goal to be reinstated to his former position as Vice President,” the statement alleged.

The group called for grassroots conventions of all SPLM-IO members and sympathizers.

It appealed to all former SPLM-IO members who refused to be part of the new government by forming new factions to return to the party under General Gatwech.

The conference chaired by Gatwech expressed its commitment to achieving justice, peace, and stability in South Sudan through the revitalized peace deal.

“The new chairman of the SPLM/A-IO will ask the peace partners, including the [President] if the peace agreement is alive, then we have to continue with it,” Brig. Gen. Gatjiath added.

He was then appointed by President Salva Kiir as Peace Advisor to the Presidency.

But in an interview with Eye Radio in June, General Gatwech turned down the offer, describing the appointment as an attempt to lure him to come to Juba.

He argues that such positions do not exist in the revitalized peace deal.

Gatwech further said he won’t be coming to Juba to take up his new role unless the unified forces are graduated and deployed.

“If there is no security arrangement, it means that there is no peace at all in the country,” Brig. Gen. Gatjiath affirmed.

He further claimed that no one consulted him over the appointment, although Dr. Machar’s office insisted that the appointment was made with the “full knowledge and consent” of General Gatwech.