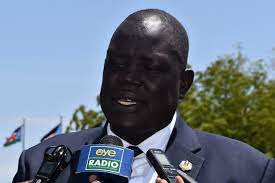 on violations in South Sudan.

This is according to the Deputy Minister of Foreign Affairs, Deng Dau.

Last week, the Chairperson of the Commission of Human Rights in South Sudan released a report covering a period of violence in the country reportedly perpetrated by government and armed militants.

The report said since last March, the human rights situation in the country had deteriorated considerably.

Yasmin Sooka, the Chairperson of the Committee noted that there has been an increase in extrajudicial killings and enforced disappearances and torture as well as rape and conflict-related sexual violence.

According to the report, between June and August of this year more than 100 civilians were killed in an ethnic conflict of Tambura in Wester Equatoria.

Between 80,000 and 120,000 people have reportedly been displaced by the conflict, with thousands fleeing to neighboring Bahr el Ghazal state and Ezo County.

However, Deng Dau says the Ministries of Interior and Justice have been directed to have a comprehensive study of the report and will be able to respond considerably.

“It is not just a one day answer we have to see a comprehensive look of it. So with respect to human I think the ministry of Justice will be able to give comprehensive report about that particular report”, Deng Dau said while addressing the press on Friday.