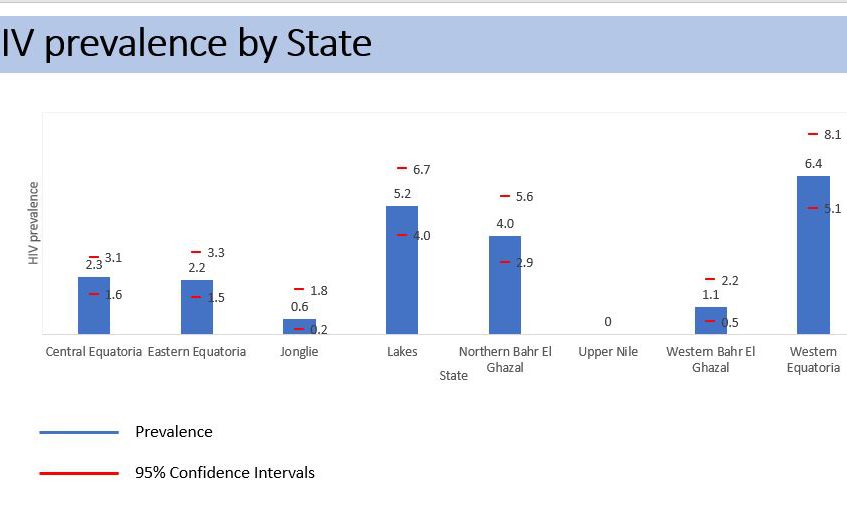 Western Equatoria and Lakes states are leading in HIV prevalence among women in the country, a report by the Ministry of Health suggests.

This is based on a surveillance report released in Juba on Thursday.

The prevalence was found to be higher in rural areas with 4.4 percent, than the 3 percent in urban areas.

The “South Sudan Antenatal Clinic Sentinel Surveillance for HIV/Syphilis 2020” was compiled by the Ministry of Health between July 1st and September 30, 2020.

It studied HIV prevalence among pregnant women between 15-49 years, who visited 30 out of the 41 antenatal clinics.

The routine surveillance report Eye Radio has obtained indicates that Western Equatoria had the highest HIV prevalence with 6.4 percent, followed by Lakes state with 5.2 percent.

The ministry also noted an increase in Central Equatoria.

Warrap and Unity states were not covered by the report due to what they referred to as stockouts.

“The estimate that we have been using is something called expectant estimate whereby we put the data for the one year and analyze by a software called EPI INFO and we get the prevalence,” said Dr. Agai Akec, deputy director for Treatment, Care and Support at the department of HIV.

The ministry, however, noted that the latest report is inconsistent with the 2017 surveillance findings which put the prevalence in rural sites at 2.4 percent and urban at 3.3 percent.

Sentinel surveillance among pregnant women attending antenatal clinics has been the main source of information on HIV trends in sub-Saharan Africa.

These data have also been used to generate national HIV and AIDS estimates.

Dr. Akec stated that this is because the country lacks resources to conduct national population-based household surveys to determine HIV prevalence in the country.

“It needs the government and partners to work it out so that we have the population-based survey and to have the accurate prevalence,” he added.

He added that the prevalence of syphilis has dropped from 8.1 percent to 2.4 percent in the country.

The South Sudan Antenatal Clinic Sentinel Surveillance for HIV/Syphilis is expected to help in monitoring the epidemic through the comparison of data from different geographical regions and changes over time.

The data will also provide a useful tool for advocacy, planning and resource mobilization.