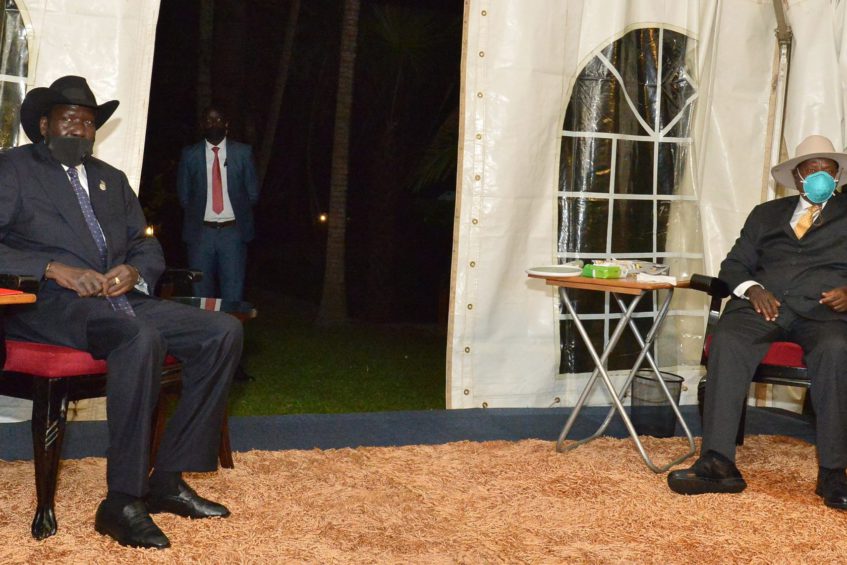 President Salva Kiir meets President-elect Yoweri Museveni at his residence in Entebbe on Tuesday, May 11, 2021. Credit| Office of the President

President Salva Kiir has arrived in Entebbe, Uganda to witness Yoweri Museveni take oath for the sixth time as President of Uganda.

Kiir is among 11 other Heads of State who have confirmed their attendance for the swearing-in ceremony that will take place tomorrow at Kololo Ceremonial Grounds in Kampala.

Upon arrival this afternoon, Kiir met Museveni to briefly discuss bilateral relations ahead of the inauguration.

His main rival was young musician-turned-politician Robert Kyagulanyi also known as Bobi Wine, who came second in the contested elections.

This is Museveni’s new term that will extend towards his 40-year rule of Uganda.

“Some people think that being in government for a long time is a bad thing,” Museveni said of his stay in power. “But the more you stay, the more you learn. I am now an expert in governance.”

So far Presidents, Vice Presidents, Prime Ministers, and Foreign Affairs Ministers from various countries have confirmed their presence at the inauguration.

According to officials, more than 4,000 guests will witness the function that will begin at 8 am and end at 2:30 pm on Wednesday

This is the second time in 10 years that President Kiir has attended the swearing-in ceremony of Yoweri Museveni.

“President Yoweri Kaguta Museveni and the people of Uganda have stood with us in the hardest times, proving to the world at large that South Sudan could count on the support of the Ugandan people and government,” Ateny Wek Ateny, Press Secretary in the Office of the President once said. “As such, President Salva Kiir Mayardit wants to show his gratitude by personally attending the swearing-in ceremony of his brother.”

Security has been beefed up with joint security teams patrolling major roads across Uganda.