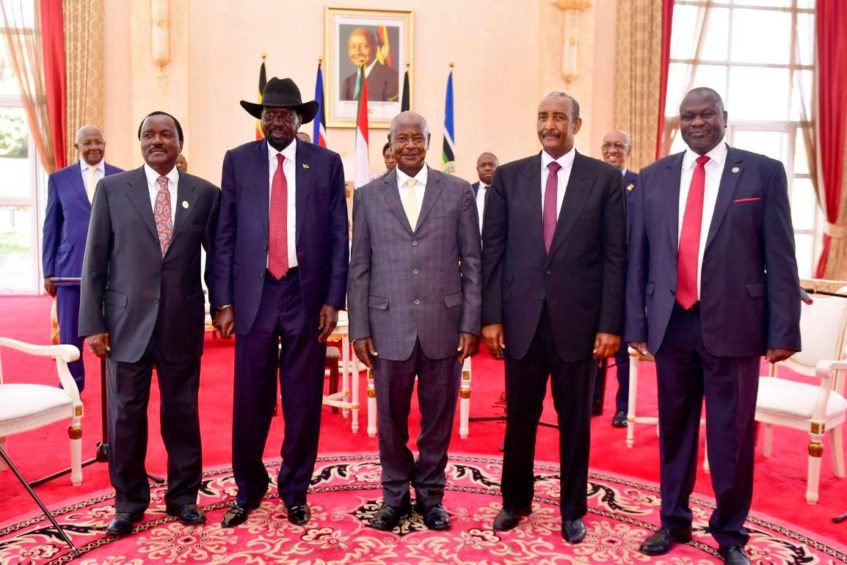 A summit organized by the Ugandan President Yoweri Museveni today resolved to postpone the formation of the transitional government of national unity.

The parties were expected to form a coalition government next week as agreed in May this year.

This is the second time the pre-interim period has been extended to allow for the full implementation of the security arrangements.

These include training and unification of the army, the national security and the police.

The new pre-transitional period will start on November 12 to February 22, 2020.

The decision arrived at today was made in Entebbe in the presence of President Museveni, Sudanese Sovereign Council leader, Abdalftah El-Burhan, and Kenya ‘Special Envoy, Kalonzo Musyoka.

According to a statement issued on President Museveni’s social media handles, the parties will review the progress of the implementation after 50 days.

It says a mechanism will also be established for Guarantors such as Uganda and Sudan, and the parties to supervise the implementation of agreed items.

The Entebbe summit further resolved to ask IGAD countries to “address the status of Dr. Riek Machar” and also urge the international community to “continue supporting this revitalized peace process.” The move comes amidst international pressure, urging President Salva Kiir and SPLM-IO Leader Dr Riek Machar to ensure that the peace accord does not collapse following disagreement over the establishment of the unity government.

Kiir wanted to set it up with or without Dr Machar, who argued that key security arrangements must be put in place first, citing a possible repeat of the July 2016 incident.

However, the world, particularly the UNSC said the new government must include all the signatories and be done after all the security arrangements are implemented.