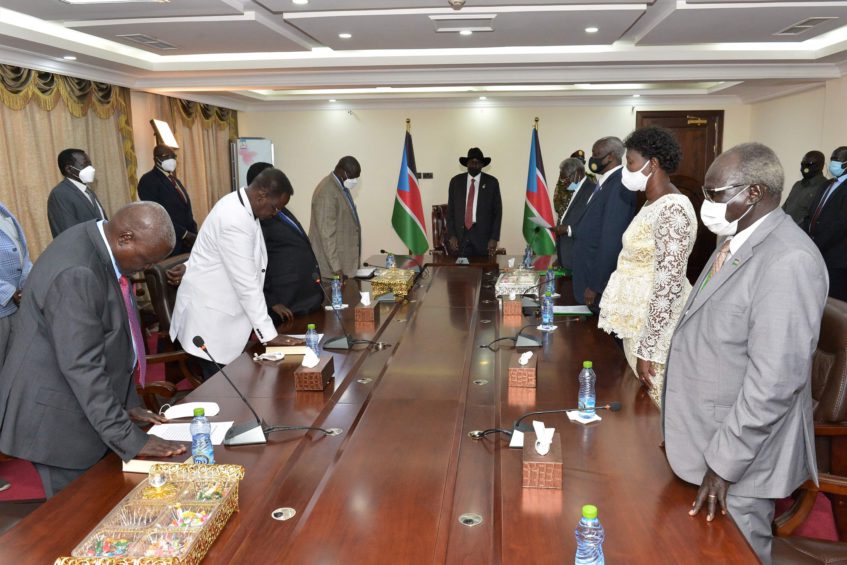 The newly appointed governors take oath of office on Saturday, January 30, 2021 | Credit | Office of the President

Budhok Ayang Kur was appointed on Friday together with his deputy James Tor Monybuny.

The move brought to an end a long deadlock between President Kiir and his first deputy Dr. Riek Machar over the nominee for the gubernatorial post.

Speaking after the swearing-in ceremony yesterday, Kiir urged the new Upper Nile leaders to work together to reconcile communities and restore peace.

For his part, governor Budhok says he is aware of the daunting task of reconciling communities of Upper Nile.

Since the appointment of state governors in June last year, Upper Nile had remained without a governor over a disagreement on the nominee.

Major-General Olony is the commander of Agwelek forces that signed a military merger and incorporation into the SPLA-IO, under the leadership of Dr. Machar in June 2015.

Dr. Machar said he replaced Gen. Olony after he declined the position two weeks ago.

The peace parties are yet to unify and deploy government and opposition forces.

They are also yet to reconstitute the national legislature – the body responsible for enacting reforms stipulated in the agreement.

According to observers, disputes among the peace parties and financial constraints have presented major obstacles to completing the peace processes.