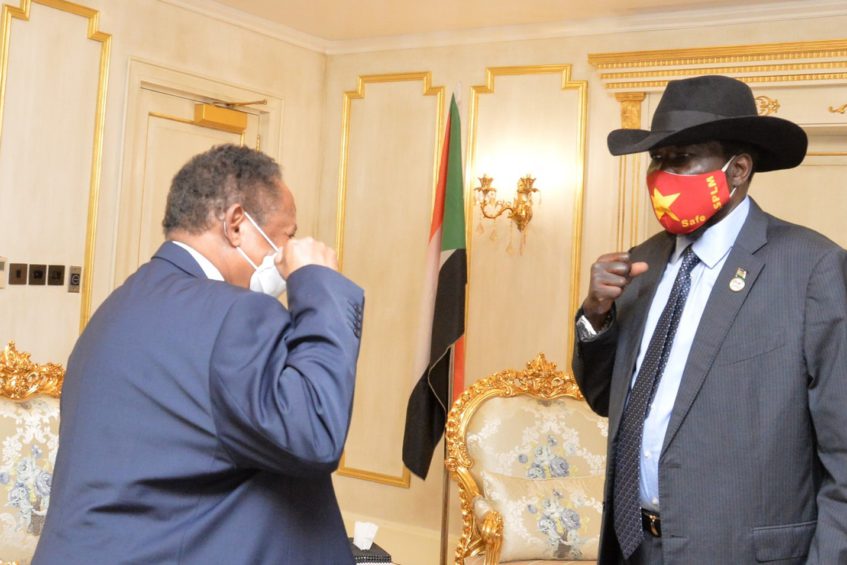 South Sudan has asked Sudan to ensure renegades from either country do not find refuge and a place to operate within their territories.

President Salva Kiir says the two countries should discourage armed rebellions by not harboring their leaders.

Since 2012, South Sudan and South Sudan have been trading accusations that each was hosting rebel groups.

Each said Juba and Khartoum were provided military and logistical support for the rebels.

Armed groups from South Sudan have often operated from the Sudanese borders, while their leaders live in Khartoum.

Sudan has also said former rebel groups, such as the SPLM-North, have often launched their offensives from South Sudan.

In his remarks, President Kiir said the two governments should ensure no one threatens peace in their respective countries.

“We must refrain from providing military or logistical support to such destructive groups,” he told Hamdok.

“…[and] force such group to accept peaceful resolutions to whatever grievances they may have or flash them out.”

The two countries also agreed to revisit the 2012 Cooperation Agreement as a means of strengthening security, trade and movement of people.

In September 2012, Sudan and South Sudan signed nine agreements, including a framework agreement and specific agreements on oil, border issues, citizenship, and the division of debts and assets.

These represented many of the unresolved issues stemming from the secession of South Sudan in July 2011.

After the independence of South Sudan, the two countries agreed on post-referendum relations tackling the status of nationals of both countries in each state, border, trade, and cooperation on central banking.

They also settled on payment of post-service benefits for South Sudanese nationals who previously worked in a united Sudan.

Other issues agreed upon were the division of assets and liabilities, oil transit, arrears and claims, and a joint approach to settling international debts.

South Sudan agreed to offer transitional financial assistance to compensate Sudan for the loss of most of the oil revenue.

Sudan, on the other hand, agreed to allow South Sudanese to travel freely across its borders, settle, work and own properties anywhere in Sudan.

But the cooperation agreement collapsed shortly after the two countries went to war over the oil-rich areas of Panthou and Abyei in 2012.

They have since then paid little or no attention to the document.

The Sudanese Prime Minister Abdalla Hamdok said there was a need to revive the agreement.

“Our aim is to establish good and true relations as brothers and sisters of one nation in two countries,” the premier stated.

“We are capable of achieving these issues – trade, security, border, education, health and the four freedoms – because we have already been cooperating and working together as South Sudanese and Sudanese.”

For his, President Salva Kiir directed various government officials to discuss – in clusters – areas of their interest.

The governments say the cooperation agreement will provide the two countries freedom of movement, freedom of residence, freedom to undertake economic activity, and freedom to acquire and dispose of their property in Sudan and South Sudan.