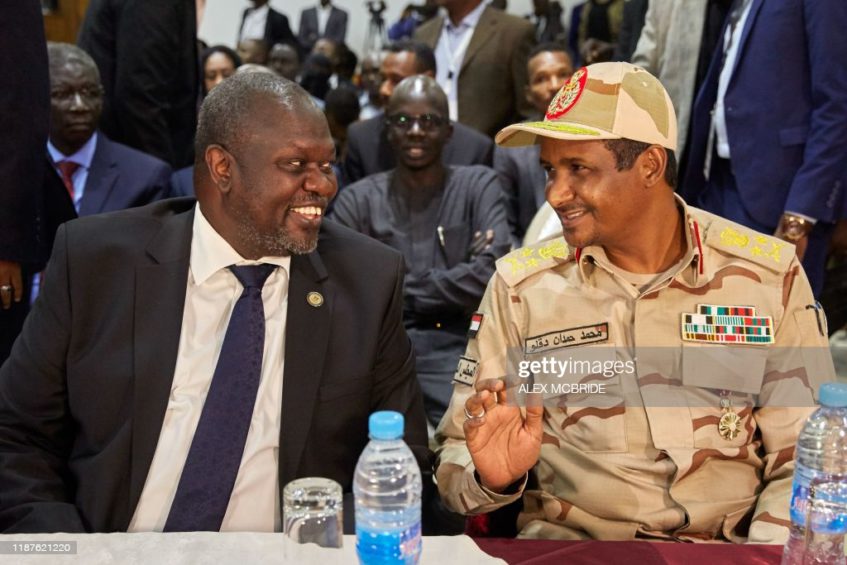 Top leaders in South Sudan and Sudan have expressed interest in the reactivation of the four freedoms agreement to facilitate trade between the two countries.

The 2012 agreement grants South Sudanese and Sudanese the right to own property, free movement, residence and employment in both countries. It followed the secession of South Sudan from Sudan in 2011.

South Sudan’s First Vice President Dr. Riek Machar emphasized on the restoration of the agreements -especially those that will boost trade between South Sudan and Sudan.

“This is very important to have ownership and freedom to sell anything you want. These four freedoms, we want them to be activated so that people will be able to move and do business, to be able to stay and trade where ever they want,” he stressed.

Dr. Machar was speaking with the Deputy Chairman of the Sudanese Transitional Sovereign Council, Lt. Gen. Mohamed Hamdan Daglo during the launch of a one-week exhibition of Sudanese products in Juba, Monday, Jan. 11.

Lt. Gen. Hamdan Daglo emphasized the close ties and bonds between the people of the two countries. He stated that is enough reasons to have the borders reopened.

“We are actually one people, our culture is one, our food is the same, and that’s why we need to reactivate those agreements to help us,” he said.

Daglo warned against prolonged politicking over the four freedoms.

“This requires action, not speech because politics cannot be eaten, let’s do the integration. Yes, we are two countries but I have right here and you have right in Khartoum.”

The cooperation agreement was signed during the administration of former Sudanese president Omar Al Bashir in Addis Ababa to also include; oil fees, security and border demarcation.

South Sudan has expressed its keen interest in demilitarizing buffer zones that exists along the borders with Sudan.

Dr. Machar said some of the un-demarcated areas are being used to smuggle goods into both countries -something the leaders must change.

The demilitarized buffer zone was set up in 2013 along with the disputed border areas.

Machar disclosed that the two countries have so far established a security-political committee to resolve border issues.

The ongoing Sudanese products exhibition was organized by the Ministry of Investment and the Sudanese business community in Juba.

The trade fair is meant to lure business communities in South Sudan to import more from Sudan.