You are here: Home  |  Featured | Health   |   Netizens criticize US ambassador over a tweet

Kelly Craft, US ambassador to the United Nations | Credit | BBC

The US ambassador to the United Nations has come under fire over a comment she made about the expulsion of a foreign reporter from South Sudan.

In October, the Media Authority revoked the press accreditation of Canadian journalist Sam Mednick after a story she wrote angered the government.

In her story the Associated Press published in October, she said tensions were rising in the capital ahead of the formation of a unity government. The media regulatory body then said she “concocted misinformation intended to create panic and fear of unknown”.

The Western diplomats and media condemned the move, saying “Ms Mednick was indeed uncanny, and unconscionable, and warrants the loudest protest from organizations and governments that deem peace and elemental human rights worth defending.”

In a tweet Kelly Craft described her as a woman who has earned the people of South Sudan’s “confidence and trust.”

“Who will be their voice?” She ends her tweet.

This tweet angered South Sudanese online, with some calling it a “shock”.

They argue that South Sudanese have been speaking for themselves. Journalists keep reporting about issues affecting the country and its people.

However, local journalists face intimidation, harassment and even death while doing their job. Last week, some female reporters were physically attacked by a senior military general while covering a press conference they had been invited to. 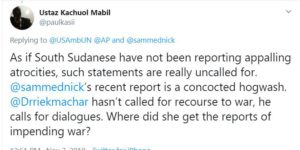