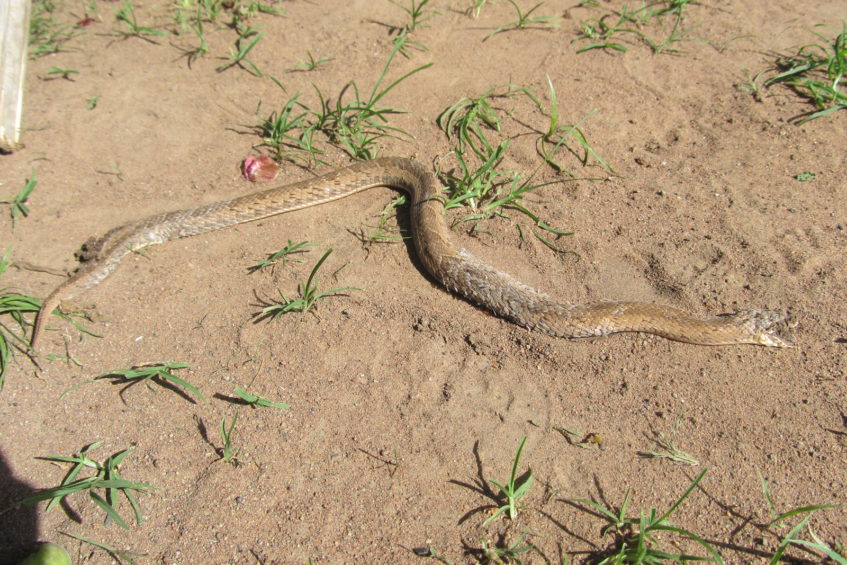 An official in Western Equatoria state says they lack anti-venom medication as cases of rampant snake bites continue to rise in Mvolo County.

This month alone, 7 people have so far been bitten by poisonous snakes in the area.

“The issue of snakebite has become an issue in my area…we are trying to contain the situation by advising people not to leave their houses in bushes,” an official reported.

The latest incident is of a six-year-old child who died on Monday.

According to the County Commissioner, the boy was bitten by a venomous snake last weekend.

John Komodee advised the residents “to clean their houses so that snakes do not come near to your house or even enter to your room.”

Commissioner Komodee stated that there is a shortage of antivenom in the County.

He pointed out that many victims of snake bites resort to traditional methods to treat snake bites.

“This is the only challenge that we are facing.”

According to the Médecins Sans Frontières, many of the victims of snake bites in South Sudan are children and most live in rural areas where it can be hard to reach a doctor.

It said many of the victims in the country are unable to get the treatment that could save them from death or permanent disfigurement.

MSF stated that the cost of antivenom is about $250 per patient – the equivalent of two years’ salary for most people in South Sudan.

Doctors Without Borders organization believes hundreds of thousands of people will continue to remain neglected until antivenoms are made safe, available and affordable.

An estimated five million people are bitten by snakes each year around the world. Of these, 125,000 die and 400,000 are left permanently disabled or disfigured.

MSF teams are providing free treatment to increasing numbers of people for snakebite, including more than 300 per year in the hospital in Agok – the only health facility in Abyei region with stocks of safe and effective antivenom.