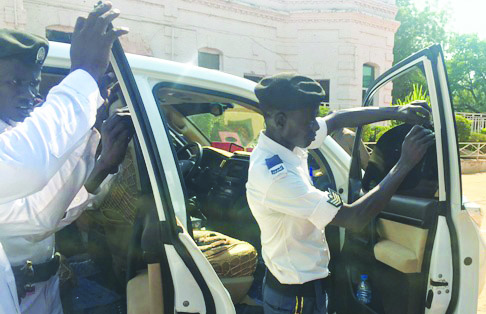 Traffic Police have once again launched an illegal crackdown on vehicles with tinted windows in Juba.

On Tuesday, Jan. 26, motorists said they woke up to harassment by the police, with the support of the other organized forces – including the regular police, national security, and the army.

The police confirmed that it has restarted the crackdown on “Primo, Harrier and all small cars often involved in night robberies or armed robberies.”

Deployed at every road intersection, the police pulled over vehicles with tinted windows – paralyzing road traffic in parts of the capital, according to eyewitnesses.

When contacted by Eye Radio, police spokesperson Major-General Daniel Justin said they were targeting sedan cars which he claimed criminals hide behind their darkened windows.

“It is actually a resolution from the Council of Ministers two years ago and we implemented and the situation was a bit normal, but these people resurfaced, so we thought it is wise to carry out this operation to reduce crimes,” he said.

However, recent remarks by senior government officials suggested that most armed robberies are carried out by members of the organized forces, including the regular police, national security and the army.

In addition, the traffic act, 2003, does not criminalize tinted car windows.

In South Sudan, a lack of information surrounding laws and policies can make it difficult for ordinary citizens to spot corrupt activities being carried out by the authorities. So Eye Radio has been publicizing public concerns over corrupt practices involving traffic police.

It continued to engage lawmakers, lawyers, activists and the public on the extortion challenges after the harassment resumed.

Last year, the head of the traffic police department, Major General, Kon John Akot, told Eye Radio in an exclusive interview that he has detained 85 police officers and dismissed 8 over extortion attempts against motorists in Juba.

“We have arrested 85 police officers. Eight of them are of different ranks. Some of them have ranks of second lieutenant and captain. We have dismissed them from the service, and some have been taken to the court,” said Gen. Akot.

But motorists have again reported cases of harassment and extortion as the crackdown resumed this week.