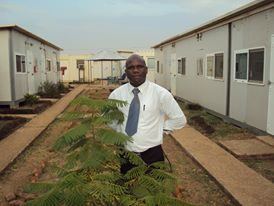 A journalist working for the UN radio is being held by the media authority in Juba.

Sani Martin was picked this afternoon at the ministry of parliamentary affairs.

This is according to journalists who were at the time covering a press conference by the minister of information, Michael Makuei.

They said security men in black suits confiscated Martin’s tools, including his phone, recorder and notebook – before whisking him away.

One of the journalists who chose anonymity told Eye Radio that the reporter is being held at the Media Authority premise in Juba.

The motive behind his arrest is not yet clear.

When contacted by Eye Radio, the Director of Media Authority said he was not aware of the detention.

In March, the Media Authority ordered for closure of the UN radio over what it calls “persistent non-compliance” and “refusal to be regulated” under the country’s media laws.