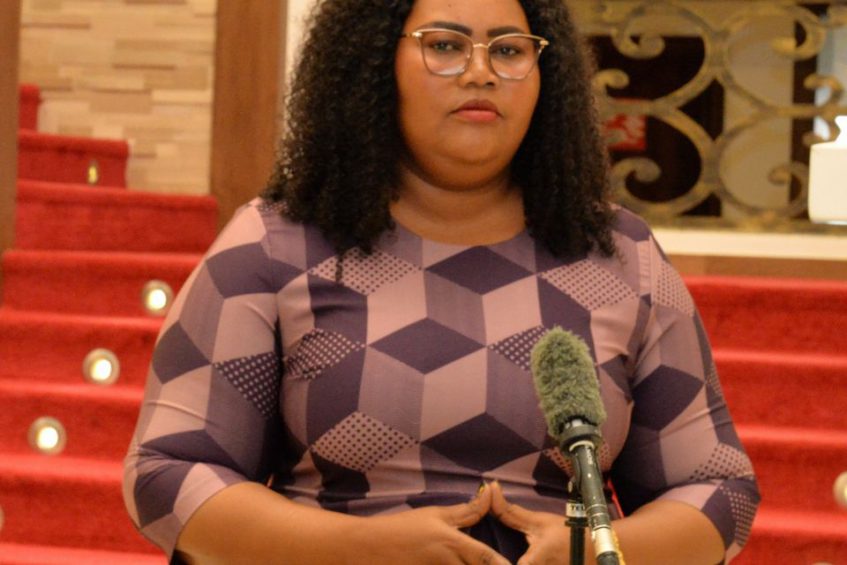 Josephine Napwon, minister of Environment and Forestry speaks to the media after meeting President Salva Kiir at J1 on Wednesday, June 16, 2021 | Credit| Office of the President

The World Environment Day is commemorated annually on the 5th of June.

But South Sudan postponed the global event to a later date for unclear reasons.

However, speaking on the state-run TV on Wednesday, the minister of environment announced that the celebration will take place on Thursday.

“The project will build the capacity of the government and out communities to adopt efforts to combat climate change,” Josephine Napwon told SSBC.

President Salva Kiir, she revealed, has accepted her invitation to grace the occasion at the Freedom Hall in Juba….

She called on stakeholders and members of the public to attend the event.

This year’s theme of World Environment Day is: “Reimagine. Recreate. Restore,” and its focal point is ecosystem restoration.

Ecosystem restoration, according to the United Nations, means preventing, halting and reversing the damages caused on the ecosystem.

In South Sudan, experts say the impact of climate change is being witnessed by the extreme heat, drought and insect outbreaks.

Parts of the country also witnessed locust invasion last year. This has resulted in nearly 8.3 million people being food insecure.