S.Sudanese takes to the streets to decry racism in Melbourne, Australia 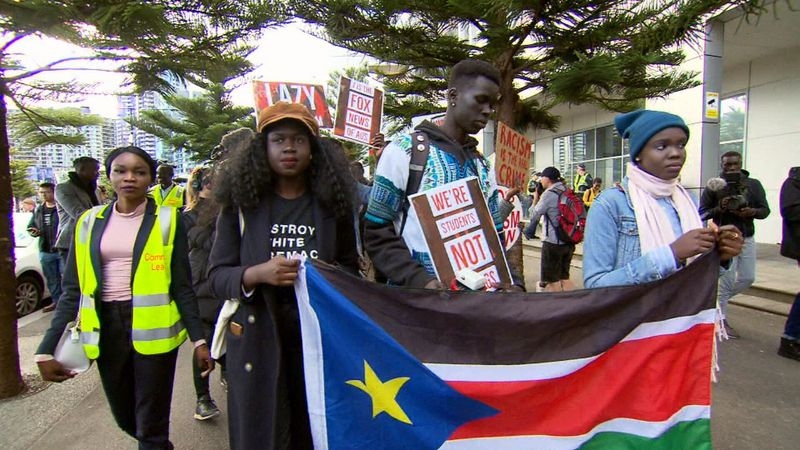 Titan Ruon [Center] and others demonstrating on Melbourne's Docklands. PHOTO//9NEWS

South Sudanese living in Melbourne took the streets over the weekend to protest what they described as unfair treatment and racism in Australia.

The protestors carrying South Sudan’s flag and joined by sympathizers decried the generalization of the South Sudanese community as African gangs.

According to Australia’s Channel 9News, hundreds, from all nationalities, turned out clutching megaphones, placards and banners.

The demonstration came days after the death of a South Sudanese girl, Laa Chol, and allegations that her death was as a result of gang violence.

In January, the Australian police reported an increase in the level of gang violence by African immigrants, with most being South Sudanese youths.

A group call Apex and Menace to Society gangs are accused of breaking into houses, destroying furniture, windows, including smoking marijuana in Melbourne West.

There are thousands of South Sudanese immigrants living in Victoria.

Dozens have been arrested and a revocation of their visa has been filed.

However, community leaders have described the move as racially motivated.

“People should not have to see me on a train and feel like I am a threat to them because I am 6’5 and I am black. We are here to raise,” said Titan Ruon, one of the protest organizers.

In 2007, a young South Sudanese boy was bashed to death by two men in what was believed to be a racially motivated attack.

Titan Ruon and Nyawic Puok said their community is being treated as a threat.

They said the perception is discriminatory.

The Australian Prime Minister, Malcolm Turnbull, blamed the Victorian state government for failing to address the underlying causes of gang-related violence in Melbourne.

Australia’s Opposition leader, Mathew Guy also agrees that there has been no early intervention and not enough youth working in Victoria.

“You have to acknowledge an issue before you fix it,” said Mr. Guy

“If there is a disproportionate level of people involve in crimes a certain community, then we have got to acknowledge it and fix it.”