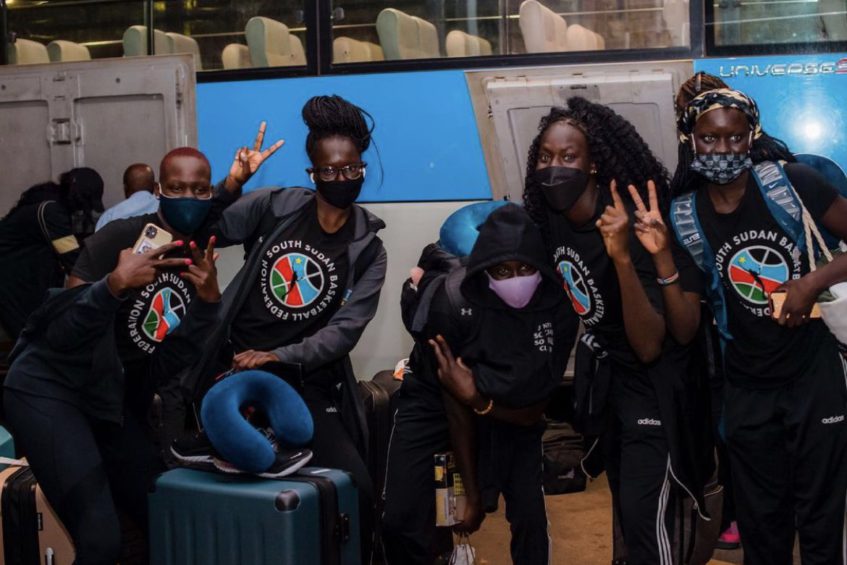 The women's basketball team touched down in Kigali on July 9th for the country's first-ever Afrobasket qualifiers/Photo: SSBF

South Sudan’s women basketball team will represent the country for the first time in the Afrobasket Zone 5 Qualifiers beginning tomorrow, in the Rwandan capital, Kigali.

The South Sudan Basketball Federation announced on Sunday a 17-member team for their qualifying matches.

Among them is star player Nyaduoth Lok, who plays for the George Washington women’s basketball team in the U.S.

Another star player, Adut Bulgak, however, pulled out of the tournament after suffering an injury in their training camp in the US city of Sacramento, early this week.

She is the only South Sudanese woman to have played in the prestigious USA Women’s National Basketball Association.

South Sudan’s women team will play Egypt, Kenya, and Rwanda to qualify for the tournament scheduled for September in Yaunde, Cameroon.

Head Coach Lindsey Harding says the tournament is an opportunity for the South Sudanese women to inspire young girls of their potential.

🗣 Listen to Head Coach @Lindsey_Harding talk about how special of a moment this is as our women step on the court for the first time! 🇸🇸🏀 pic.twitter.com/q2vhmqlAlB

The FIBA Women’s AfroBasket is the top women’s basketball tournament in Africa which is staged every two years and features the top 12 national teams on the continent.

The winner of this qualifier will earn a spot in the FIBA Women’s AfroBasket 2021, to face five other teams already qualified for the tournament.

In addition to hosts Cameroon, 2019 champions Nigeria, finalists Senegal, third-placed finishers Mali as well as the fourth semi-finalists Mozambique have already been automatically qualified for the event.

The Republic of South Sudan gained independence in 2011 and has been a member of FIBA since 2013.

The sport has grown rapidly in the country thanks to iconic NBA players such as Manute Bol and Luol Deng, as well as the first-ever WNBA player in Adut Bulgak.

The country has been ranked number 97 by the International Federation of Basketball, thanks to the successful Afrobasket qualifying campaign.