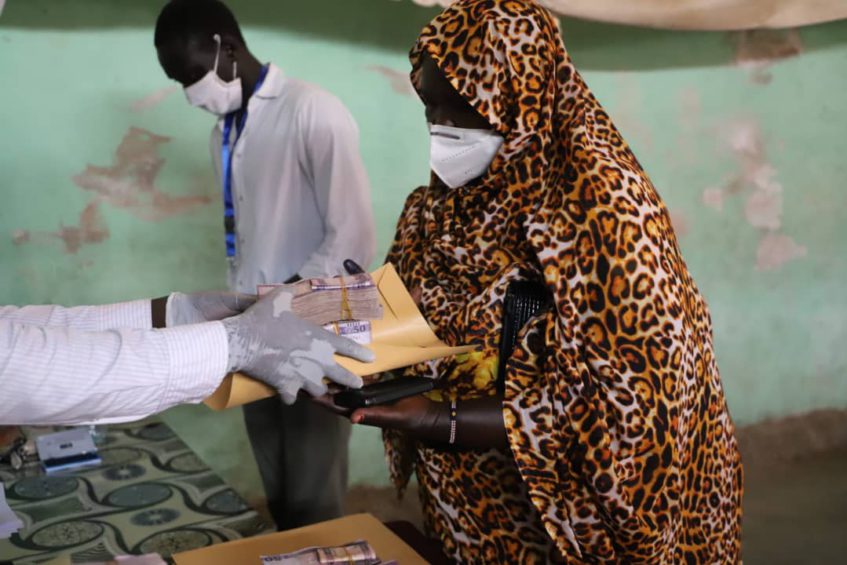 One of the recipients of cash assistance from the UN Office for Project Services - credit: UNOPS April 2021 - FILE PHOTO

Nearly 100,000 poor and vulnerable people in Juba start receiving cash payments under South Sudan Safety Net Project, this is according to the UN Office for Project Services (UNOPS).

The UN Office for Project Services in partnership with the Government of South Sudan are managing the cash transfers.

Launched in July 2020, the South Sudan Safety Net Project aims to support some 430,000 low-income and vulnerable individuals across 10 counties in South Sudan.

According to UNOPS, the project locations include Juba, Pibor, Bor, Kapoeta East, Torit, Tonj South, Gogrial West with cash assistance to meet their urgent needs and invest in their household welfare.

The statement stated that the target beneficiaries include vulnerable members of society including women headed households, children, people living with disabilities, and the elderly.

“Specifically, the project provides beneficiary households $40.5 per month for a period of nine months. Since the launch of cash transfers in March 2021 about $2 million has been transferred to the targeted poorest and most vulnerable households,” said part of statement.

It says preparations are also underway to extend the program and start cash payments in Bor, Torit and Gogrial West that are experiencing acute food insecurity due to multiple shocks including floods and the locust invasion.

70-year-old Kelida Wilson, a recipient of the cash assistance noted that: “It has not been easy for my family these past months. Things have become worse with COVID-19.”

“With the financial support I have received from this project, I am going to stock the house with food and other basic needs.”

As head of her family, she has been struggling to meet the needs of the family, especially during the COVID-19 pandemic.

During the launch of the cash distribution in Juba on Tuesday, Dr. John Ogoto Kanisio, the Under Secretary in the Ministry of Agriculture and Food Security.

“The project is implemented in a COVID-19 sensitive manner to respond to increasing vulnerabilities and mitigate contagion risks,” said Dr. Ogoto.

“It will prioritize Juba because of the disproportionate impact of Covid 19 on poor and urban households.”

Mrs. Esther Ikere Eluzai is the Undersecretary in the Ministry of Gender, Child and Social Welfare. She said that women are the primary beneficiaries in this project.

“The project will facilitate a shift in gender relations and attitudes by making women the primary beneficiaries of cash assistance, and this will contribute to improved nutrition, health and education to all members of the households,” she said.

Husam Abudagga is the World Bank Country Manager for South Sudan. He said the South Sudan Safety Net Project is critical to address economic vulnerabilities in the country.

“The South Sudan Safety Net Project is critical to address economic vulnerabilities in South Sudan and the cash distribution is expected to make a real contribution towards strengthening the resilience and supporting the livelihoods of the neediest and most deserving households in South Sudan,” said the World Bank Country Manager for South Sudan.

“The Project is one of our flagship interventions through which we are uniquely positioned to strengthen the humanitarian-development nexus as well as the foundational building blocks of the social safety net system in South Sudan.”

Since May 2020, the UN Office for Project Services has been working with the South Sudan’s Ministries of Agriculture and Food Security; Gender, Child and Social Welfare; and Finance and Planning to implement the project over the next two-and-a-half years.

In a statement, UNOPS Country Director and Representative in South Sudan, Peter Mutoredzanwa stated that the UN agency will continue the cash payments to the vulnerable people.

“UN Office for Project Services will continue the cash payments with the same momentum and scale up to the other locations in our bid to reach our target of 65,000 beneficiary households,” said Peter.

“As we scale up to the other locations, in consultation with the  Government and World Health Organization, we will explore the commencement of COVID compliant public works activities  to enhance community assets for flood controls and other natural resource management above the cash that will be provided.”