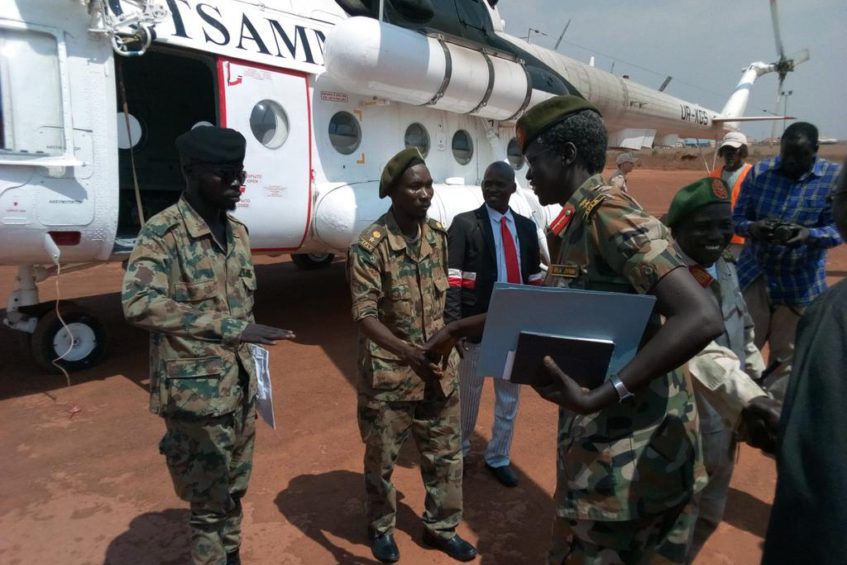 CTSAMVM Team in Wau, facilitating the first ever meeting of the SSPDF and SPLA/IO in Nov. 2018. Photo credit: CTSAMVM

SPLA-IO forces in Western Bar El Gazal State have released the Commissioner of Wau County after spending about 24 hours in a detention facility.

Jecinto Matia was arrested between Wau town and Mboro area in the early hours of Friday.

The Commissioner and several other state officials were reportedly traveling to Bagari to inaugurate a new health facility that was constructed by the Red Cross.

He was accompanied by Kamil Wana Oraj the Minister of Local Government and Law Enforcement, Dr. Vincent Taban Joseph, Minister of Health and Andison Arkanjelo Musa Albino the state Minister of Information and Communication.

However, all the delegates who were on the mission returned except Commissioner Jecinto Matia who got arrested by the SPLA-IO forces on the ground.

Jecinto Matia was freed after a team of the ceasefire monitors and some government officials went to Bagari yesterday and negotiated for his release.

According to the Deputy Sector Coordinator for CTSAMVM, Sector three in Wau, the forces claimed that they detained the commissioner because he did not notify the SPLA-IO commander about the launch of the new health facility.