You are here: Home  |  Featured | News   |   Wildfire claims another life in WES

Wildfire claims another life in WES 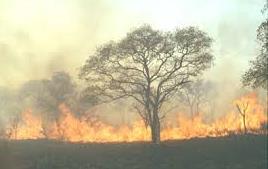 An eight-year-old boy has reportedly died in another wildfire incident in Maridi County, Western Equatoria State.

The cause of the fire is not yet known.

According to the executive director of the count, the inferno consumed crops, including harvests that had been stored in granaries.

He revealed that the deceased child, Stephen Alex, was “cut off from safe grounds by the fire” at Kowanga village on Sunday.

Wildfire incidents are becoming common during the dry season in the Western Equatoria state.

Last week, one person died and 19 others sustained serious injuries in a wildfire in Yambio County.

This occurred after at least 20 young people rushed towards the bushfire in an attempt to capture wild animals escaping the fire.

19 of them sustained first and second-degree burns.

Officials told Eye Radio that more than hundreds of families are still living under the trees because of the destruction caused by the bushfire.