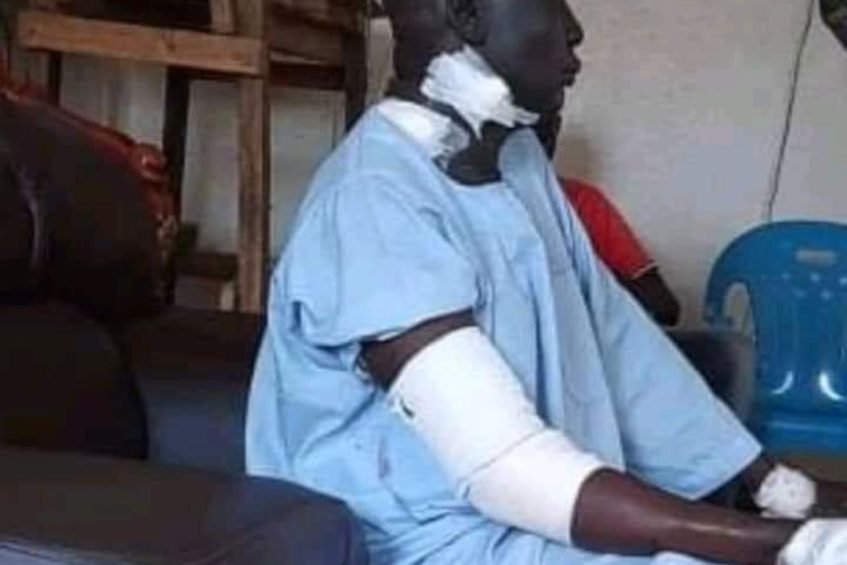 Lt. Gen. Peter Dor shortly after a doctor attended to him on Tuesday evening in Juba | Credit | Courtesy

The SSPDF general who engaged in gunfire with his bodyguard on Tuesday at Bilpam in Juba has been discharged from the hospital.

On Wednesday morning, Lieutenant General Peter Dor Munjur and 2nd Lt. Gatluak Riek shot at each other at the military headquarters.

General Dor, who is the SSPDF inspector general was reportedly shot four times in the arms and chest.

His bodyguard Gatluak was reportedly shot in the stomach. The two were rushed to the military hospital at Giada.

But the SSPDF spokesperson, Major General Lul Ruai told Eye Radio on Wednesday that General Peter Dor has been discharged from the hospital.

“He was discharged yesterday evening. He is in nice spirit. Like I stated in the press statement, the wounds were not very serious. Therefore, he was immediately discharged,” Ruai stated.

The bodyguard, Second Lieutenant Gatluak Riek is reportedly still in the hospital.

It is not clear why the two shot at each other. The army said it was conducting an investigation.