Arms embargo to stop the violence, says US’ Nikki Haley 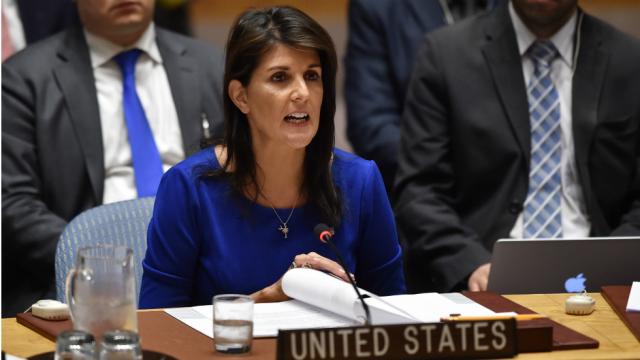 Nikki Haley, US Ambassador to the UN - File Photo

An arms embargo imposed on South Sudan will protect the civilians and stop the violence, Nikki Haley, the US ambassador to the United Nations has said.

Speaking before UN Security Council resolution on Friday, the US diplomat said that stopping the flow of arms into the country will reduce escalation of violation and protect civilians.

“The arms embargo is to protect the civilians and stop the violence. For negotiations to work and break the cycle of broken promises to stick to the ceasefire. Peace in South Sudan cannot come by letting arms to flow into South Sudan, and the opposite true.”

Haley said the US supports the ongoing peace process and this she says cannot be achieved by letting more arms into South Sudan.

“These are the weapons that the armed groups used to shoot fathers in front of the wives and children. We have heard the argument that an arms embargo might undermine the peace process. To be clear, the United States supports the peace process in South Sudan. We want nothing more than to see the dialogue work out.”

She said the parties in South Sudan have failed to adhere to the several ceasefires they signed including the recent one in Khartoum.

“We have tried everything to achieve a real ceasefire in South Sudan. And we have given the parties many chances and it is impossible to keep tracts. And we have come up with a report only from April to May of this year just in one stage. Over six weeks, the UN found out that armed forces attacked 40 villages and 120 women and girls were raped.”

For his part, the South Sudanese Ambassador to the United Nations says the country still is committed to ending the conflict despite the imposed arms embargo.

According to Ambassador Akuei Bona Malual, the decision will not help in resolving the conflict, but rather derail the peace process.

He described it as a slap on the face of IGAD and Africa Union that are making efforts to help the parties’ achieve peace in South Sudan.

However, Ambassador Malual says this will not stop them from seeking peace, which he says is soon coming.

“This resolution as you say will not help, we are still committed. We will seek peace within the region, within the IGAD, within the African Union and we hope that in the next few days, there will be more positive news in that regard. Again I want to thank those members who have absence and we look forward to better news coming from Khartoum and in South Sudan in the near future.”

It further renewed the asset freeze and travel ban imposed earlier on the six top South Sudanese commanders until March 2019.

During the votes, nine members of the council voted in favor of the US motion.

They said they were standing with the recent call by IGAD and AU on the international community not to impose any sanctions this time, saying it will undermine the current peace efforts.