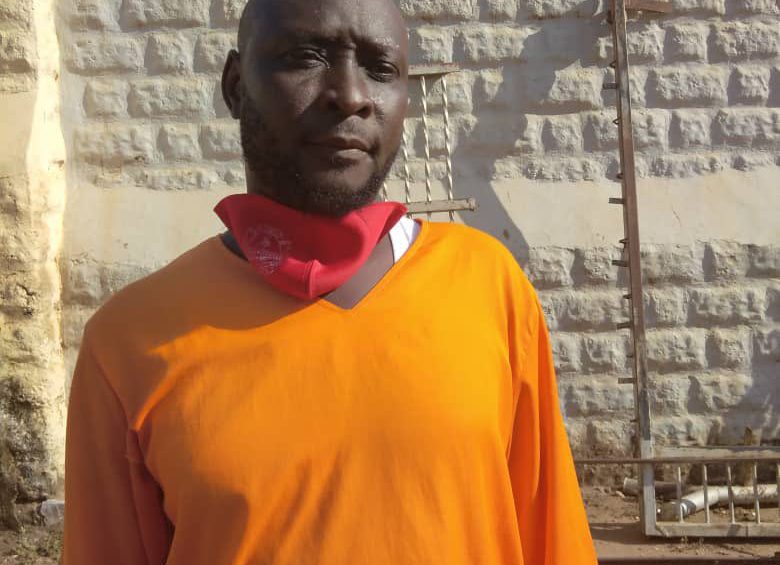 Kenneth Kawonda Joseph, 42 years who was released on Thursday June 10, 2021 from prison by court of appeal after 13 years on death row - credit | Michael Daniel | Eye Radio

Kenneth Kawonda Joseph didn’t think he would ever walk out of prison or stop calling the jail his home.

Some moments are just worth waiting for.

Now that Kawonda is free after spending 13 years on death row, he will surely appreciate all the little joys of life and more.

Kawonda a father of three kids who works as a security personal was convicted and sentenced to the most extreme penalty for murder he did not commit.

Later, he was exonerated with the help of the Justice and Human Rights Observatory Organization.

This month, the Court of Appeal has accepted his appeal and finally released.

Kawonda’s case is an extraordinary tale of justice delayed and denied.

The story starts in August 2008 with the murder of Jimmy Jibson and his body was discovered by police patrol on the road side. The patrolling was led by Jimmy Jibson’s friend and his drunk mate on the same day he got killed.

It was night time when Jimmy Jibson and his friend Voila Rudolf were sitting at African Hotel bar in Yambio town, when Kenneth Kawonda Joseph was invited by Jimmy to join them.

Kawonda asked Viola to dance with him but she refused and later she asked Jimmy to escort her to meet some people she was supposed to meet somewhere near the hotel.

On their way, Jimmy asked Viola to accompany him to his house but she refused and the two parted ways.

During security patrolling that night, Kawonda who led the patrol team discovered the dead body later identified as Jimmy.

The patrolling team reported the matter to the police where the first accused was an unknown person.

But, after the police conducted an investigation, Kawonda became the prime suspect and Voila, as the second.

Thereafter, Kawonda and Voila were taken to police custody.

Kawonda was accused of changing his civilian clothes to his military uniform after he left the hotel where he had spent time with the late Jimmy.

According to the medical report, the deceased was stabbed with a sharp object which was not found.

In 2009, the court trail relied only on the reason behind of changing his cloth at night of the murder, and also for being the first person to break the news of deceased death to the people in the bar, where he claimed he found a dead body lying by the road side. A circumstantial evidence leveled against Kawonda.

The court also considered the evidence given by the second accused Ms. Viola where she claimed she saw Mr. Kawonda quarrelling with the deceased, and punched the late while she was watching from a distance.

Mr. Kawonda’s trial was conducted without a lawyer to represent him as stipulated by the law.

In June 2009, he was sentenced to death by The High Court of Yambio, according to South Sudan Criminal Procedure Act 2008.

His co-accused Viola Rudolf was acquitted at the end of the trial.

Mr. Kawonda was only 29 years old when he was sent to prison in Juba.

While at Juba central prison, he was named the President of the death-row inmate for serving his sentence in good conduct.

Some officers at the prison  say that Mr. Joseph was one of the best inmates who collaborated with others.

After 13 years of fighting to clear his name while in custody, Kawonda has been found not guilty — following a second trial.

In 2015, Joseph got his first legal aid through the Justice and Human Rights Observatory Organization, and lawyer Geoffrey Victor Bulla the Executive Director submitted the appeal.

He appealed against the verdict twice before he was acquitted in April this year.

The Court of Appeal’s decision to acquit Kawonda was made by a panel of three Justices.

The Judges say even if the appeal was not submitted on time or even if it was not submitted at all the court is obliged to revise and check this case carefully to ensure that he has been tried in accordance with the required procedure laid down by Code of Criminal Act 2008.

According to the panel, the law has been observed so that justice is seen done.

In 2020 the Court of Appeal accepted and he was retrial.

The panel of three Judges presided by the Chief Justice Chan Reec Madut and members of John Gatwech Lul and John Akot.

The reason the penal gave after passing three judge opinions is that the statement given by co accused shouldn’t be taken as granted, at least supported by other evidence and there was no sufficient proof.

When Kawonda walked out of the Juba Central prison on Thursday into the sunlight and the arms of his family, he became one of the most lucky prisoners ever to be freed.

He has always maintained his innocence.

Speaking to Eye Radio at Juba Central Prison after he was set free, Joseph says that he didn’t believe he would get his freedom.

“I am happy that today I can stay with my family together, I am happy that I came to a new life and I didn’t believe I was going to be free again,” said Joseph.

“By God’s grace today, I started a new life.”

“I was 29 years old when I entered the prison, the court process was not fair and that is why I appealed why they were not giving my rights.”

“Some people overstayed in the prison and their cases were not heard because they had no opportunity to access lawyers or investigators. I am happy I am back to start a new life.”

Kawonda’s release was facilitated by the Justice and Human Rights Observatory Organization.

He says there is a need for courts to carefully review cases of convictions to prevent mistakenly sending innocent people to the guillotine.

“This is the process in which they can check and correct mistakes. It is unworthy to send an innocent man to the guillotine machine or to be executed to death when he is innocent.

Kawonda says after 13 years behind bars for a crime he didn’t commit, he will not hold grudges with anyone.

“I am walking out of here with no grievance toward any boy. All I want to do is find a way to help my inmate colleague to get out .

He says some are in the prison for a small amount of money he wants to help them so that they can join their family.

Now the question is who is going to compensate him for wasting 13 years of his life in vain.