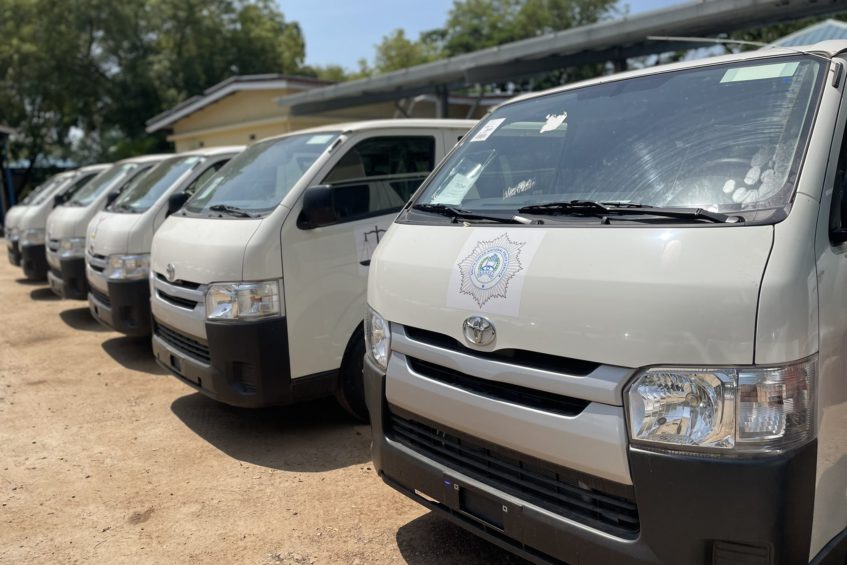 UNDP handed over vehicles and equipment to the Judiciary, Prisons Service and Police to improve work of the GBV and Juvenile Court: Photo/UNDP-South Sudan.

The United Nations Development Program (UNDP) has handed over to the Judiciary of South Sudan vehicles and Information Technology equipment.

They include six minibuses and one Toyota Prado to facilitate the movement of the judges and improve access to justice and rule of law in South Sudan.

UNDP will also deliver another five buses for transporting inmates and prison officers.

According to UNDP Resident Representative, the eleven vehicles cost more than one and a half million dollars.

“These vehicles are part of our ongoing support, we have supported institution building in the judiciary, and in the ministry of justice,” Samuel G. Doe said while handing over the vehicles at UNDP premises in Juba on Friday.

“We are currently working with the justice ministry in towards transitional justice as part of the healing of this society and as part of ending the vicious cycle of impunity,” he added.

The UNDP Resident Representative further said since the Ministry of Justice is “committed to a range of judicial reforms, we as UNDP are committed to supporting those efforts.”

For his part, the Director of External Relations in the Prisons Service says UNDP also committed to providing prison service with vans.

Major-General Antony Oliver said the vehicles will help the prison service in transporting inmates to their vocational skills training centers.

“These minibuses for the vocational center where we are training inmates are very important. Our purpose is to train the inmates and reintegrate them into society. And this cannot happen unless there is a full package of support to the process,” Maj.Gen Anthony Oliver added.

Prions officials have often complained of the lack of vehicles to transport inmates to courts.

Funds for the vehicles and equipment were donated by the Kingdom of Netherlands.