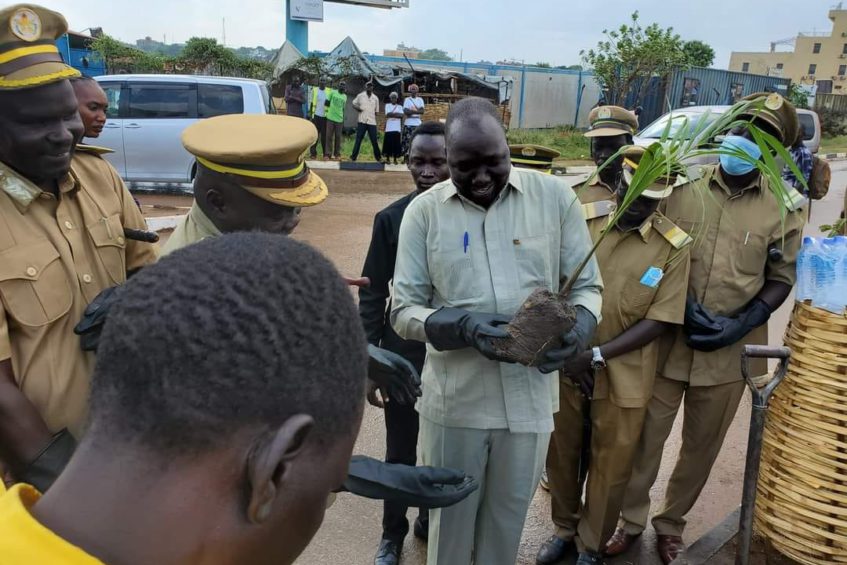 Mayor Kalisto Lado plants a tree as part of Keep Juba Clean and Green project a day before he was fired, November 17, 2021 | Credit | Courtesy

South Sudanese netizens have expressed mixed reactions over the dismissal of the mayor of Juba.

Kalisto Lado was fired on Thursday barely a year after he assumed office.

“As you know, this is always the normal phenomenon in the political arena. Anything can happen at any time.”

Kalisto Lado was appointed in March 2021.

During his tenure, traders repeatedly accused him of demolishing makeshift establishments – a move he claimed was part of “Keep Juba City Clean and Green” project.

Yesterday, the Chamber of Commerce in Central Equatoria State for the second time threatened to drag to court the city council for over-taxing small businesses.

Reacting to the news, some netizens welcomed Lado’s relief for “destroying businesses”.

“He pulled down shelters. He imposed exorbitant taxes on businesses,” wrote Anyang Ng’ong on Facebook.

“Illegally knocking down shelters and destroying people’s businesses then make noise about it in the media is what Junubin call hard work? Mabruk Gov. Adil for wielding the axe!!,” Bol wrote.

However, others showered Lado with praises, saying the “patriot” should have been given more time to make positive changes.

“He dedicated all his energy and time for the betterment of his people; from expanding roads to decontamination of the city in a few month he has been to the office,” he tweeted.

Kalisto – former Juba Mayor, is a true definition of patriotism. He dedicated all his energy and time for the betterment of his people; from expanding roads to decontamination of the city in a few month he has been to the office. Absurd, to hear his dismissal.😭😭 #SSOT.

In October, Lado accused some unnamed senior government officials, including military generals, of impeding ongoing opening up of feeder roads in the capital.

He cautioned those hindering the work of drastic measures.

“If you are a top government official or a general, please don’t be encouraging evil,” Lado warned, a stance that made him “the bravest mayor”, according to Ngor Mabor.

The only mayor that was going to make Kigali out of Juba in a very short time. Kalisto Lado is the bravest mayor Juba City has ever had. Good luck! #SSOT
#KalistoLado