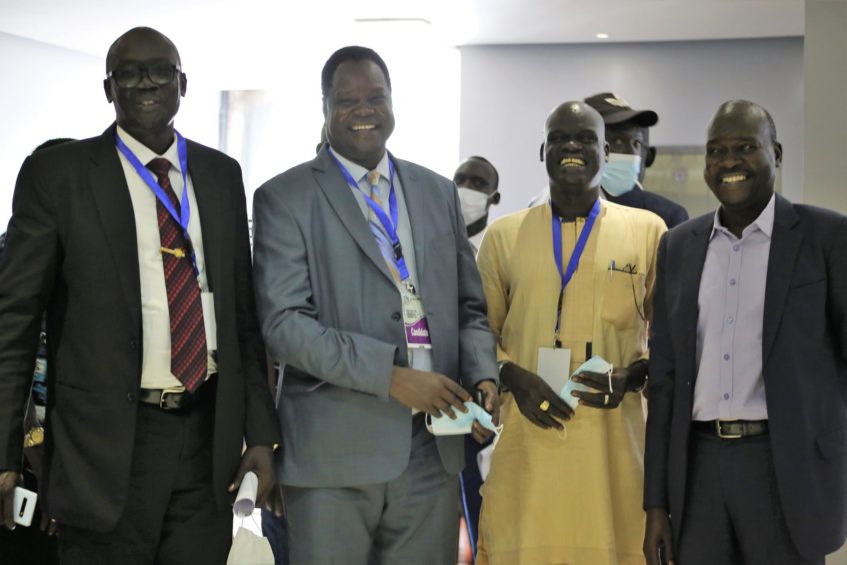 Gen. Augustino Madut [second left] and those he contested against for the Presidency of SSFA share a light moment on July 21, 2021 in Juba. Credit| SSFA

“My agenda call for serious focus on enhancing our flagship stadium and ensure more fields are developed across every state, county and Payam of this country,” Gen. Augustino Maduot Parek said in his post-election speech Thursday.

He also promised to complete the construction of Juba Stadium , which was started during the era of his predecessor Francis Amin.

“We shall be actively participating with CECAFA, CAF and FIFA as we support the efforts for the equitable development of football across the globe while abiding by the regulations and rules of the regional continental and globe governing forces.”

“Our resource mobilization efforts and partnership work with regional and international football associations shall be revitalized starting from today.”

Maduot will be deputized by Charles Udwar Ukech who won the seat of the Vice President of the South Sudan Football Association.

Maduot is the former Director-General of the Directorate of Passports, Nationality and Immigration.

He is the founder of the Citizen Football Club that plays in the second division of the Juba Local League.

Maduot is also the current President of the Juba Local Basketball Association.