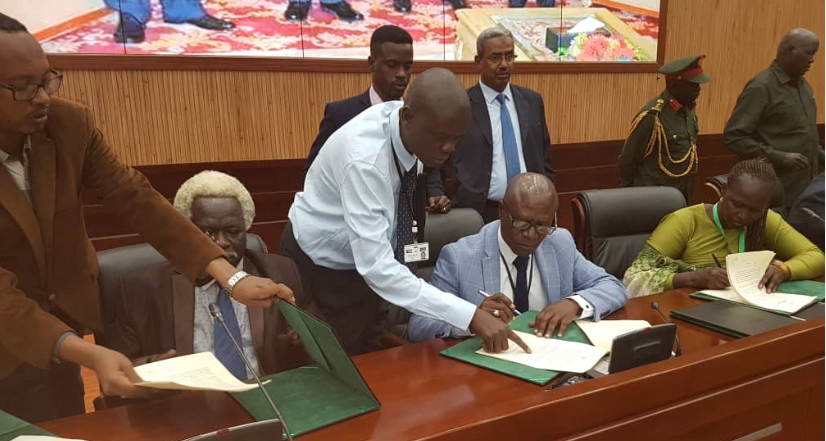 The government and the main opposition group have initialed a peace deal in the Sudanese capital, Khartoum.

The deal is mainly on governance and responsibility sharing – with the former first vice president Dr. Riek Machar taking back his position which he lost 2 years ago following a renewed fighting in Juba.

Mediators witnessed “the signing of the agreement  on governance and responsibility sharing in the government of the Republic of South Sudan that shall be applicable as of the beginning of the transitional era,” said Aldirdiri Mohamed, the chief mediator of the Khartoum Peace process.

The agreement – which Dr. Machar witnessed its initialing on Wednesday evening – awards the government 55% of the political ratio in the states and local government; SPLM-IO gets 27 %; South Sudan Other Political Parties with 10 % and 8% to the rest.

According to this arrangement, the next transitional government will accommodate five vice presidents, 35 ministers, 32 states, and 550 members of the national legislative assembly.

The minister of information and spokesperson of the government delegation Michael Makuei described the signing as great achievement:

“With this now, we have crowned it everything. We have brought peace to the people of South Sudan and we will continue to work hard to ensure that the agreement is implemented in letter and spirit.”

From his part, Agok Makur Agok, a member of political bureau of SPLM-IO said the parties “closed one of the most important areas that drew a lot of discussions.”

The final signing of peace agreement will be conducted on 5 August, 2018.