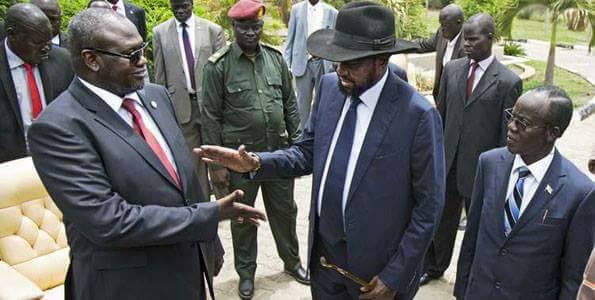 Sudan has requested to host the face-to-face meeting between President Salva Kiir and Dr. Riek Machar, according to the Minister of Information.

Last week, the IGAD Council of Ministers recommended the meeting be held this month.

According to Information Minister Michael Makuei, the two leaders are supposed to meet in Addis Ababa, Ethiopia.

However, he said Sudan’s president Omar el Bashir has requested that the talks be held in Khartoum:

Dr. Riek fled the country and has been under house arrest in South Africa.

The IGAD Council of Ministers’ recommendation came after calls by the president for him to return to the country.

Kenya has also initiated what it calls the handshake to bring President Kiir and Riek Machar together.

According to Kenyan Daily Nation, the two met for seven hours in what seemed to usher in Odinga’s full-blown role as an African Union special envoy.

Mr Odinga is also expected to visit SPLM/A-IO leader Riek Machar, who is under house arrest in South Africa.