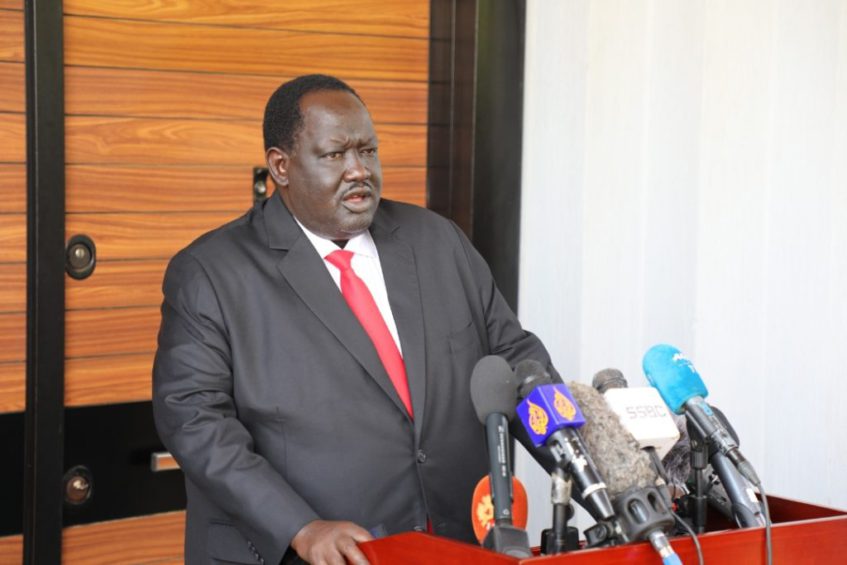 Tut Gatluak, the Chairperson of the Transitional National Committee, and also Presidential Advisor on Security - Courtesy

The Chairperson of the Transitional National Committee has admitted that the body owes some traders debt to clear though he says the amount is exaggerated.

On Tuesday, a group of traders who claim to have been supplying food items to several cantonment sites across the country told Eye Radio that they are demanding payment of more than 160 million US Dollars from the National Transitional Committee.

The group of about 50 traders claims they have been supplying the forces with food in Juba, Torit, Ashwa, and Kendila in Yei since 2019.

They also accused the leader of NTC, Tut Gatluak of avoiding them after several failed attempts to meet him.

Responding to the claims, Tut Gatluak admits accumulating the debts but says it does not reach the amount as claimed by the traders.

“The group that is claiming over 160 million dollars is not true. Because we have counted all the indebtedness of the traders and we have it now,” Tut Gatluak told Eye Radio in an exclusive interview yesterday in Juba.

“Some traders and air transport companies are demanding money from us but it is not like the way they have written the figure on your [Eye Radio] website.”

Tut says NTC has contracted several companies to provide assistance to the peace forces but some of them have already been paid.

He also refuted claims that his office rejected to meet the disgruntled traders.

Tut is now calling on those demanding pay to visit his office to settle the matter.

“We are shocked with this news today morning because the money that the government is given for peace is not enough for the peace implementation arrangements,” Tut said.

“We always bring money for peace implementation requirements for all groups such as hotels, food suppliers for the training centers, drugs and cars renting and all elements that participated in the peace process.

National Transitional Committee NTC is the body charged with supervising the implementation of the 2018 revitalized peace deal.