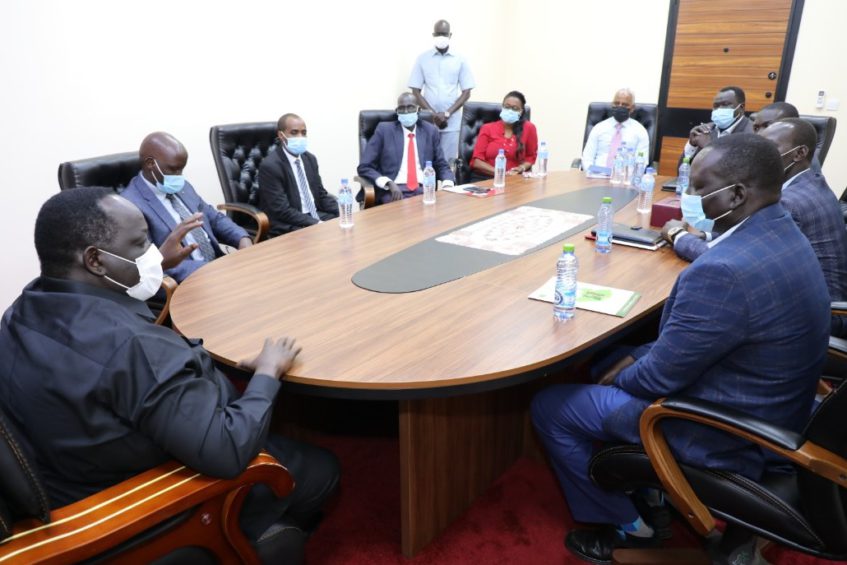 Managers of hotels and companies during the meeting with the chairman of National Transitional Committee, Tut Gatluak - credit | Gore Antony | January 8, 2020

The National Transitional Committee has promised to clear the bills of various peace delegates after some hotels and apartments terminated their accommodation.

The hotel owners have been threatening to evict government officials if they don’t get their money.

One apartment in Juba even locked some delegates in their rooms on Wednesday.

Some companies also said they delivered food and non-food consignments to soldiers at the cantonment areas, but have not been paid.

On Wednesday, they wrote a public letter to the chairperson of the National Transitional Committee over the accommodation of over 300 peace delegates since 2019.

The Chairperson of the NTC has now pledged to clear the arrears of the 9 hotels and apartments in Juba.

In a meeting held today [Friday] in his office, Tut Gatluak requested a little more time to settle the bills.

The Head of Secretariat of NTC, Stephen Wiw who addressed the media on behalf of the chairperson of NTC on Friday afternoon said the Tut has promised to pay the owners of the hotels soon.

He said Tut also pleaded with the hotel and apartment owners not to lockout the delegates.

“Honorable Tut has called the managers of hotels to appreciate them, and he has said that he acknowledged their contribution. They have accommodated the peace partners in the hotels and they have not been paid,” said Stephen.

“The fact that they have not been paid is something that is dear to him [Tut]. He also explained the situation to them. They have been patient for a long time. As NTC we are grateful for them.”

“If it was not because of their patient and love for this country, they would have locked these people out and that would have been difficult for us to move forward in the implementation of peace.”

“He [Tut] promised them to work this out, and give us [NTC] the time as they have been doing that all the time”

Speaking on behalf of the Hotel Managers, Mel Garang of South Sudan Hotel said the Chairperson of NTC requested the Hotel Managements not to lockout the Peace partners as the government would settle the bills within a few days.

There are hundreds of officials from the peace parties being accommodated in the hotels and apartments in Juba.

They include; Ministers, legislators of the yet-to-be reconstituted parliaments, military officers, and other officials.