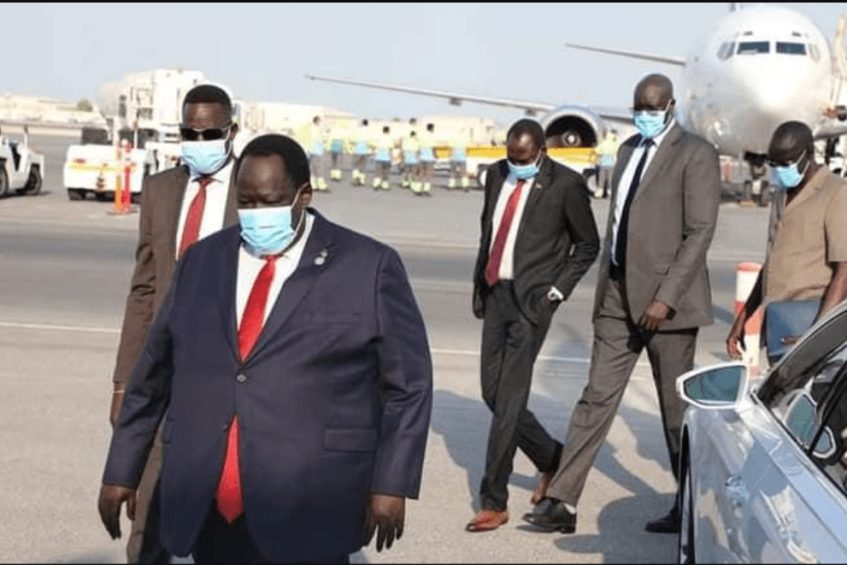 Tut Gatluak, the Chief Mediator of the Sudan peace who is also the Presidential Adviser of security Affairs. Photo credit: Curtesy

The Chief Mediator of the Sudan peace talks and Presidential Advisor on National Security Affairs is in Khartoum to discuss ways to end the political crises in Sudan.

Tut Gatluak arrived in the Sudanese capital on Thursday morning with a high level delegation including, the Governor of Unity State, Joseph Monytuil, Director of Internal National Security, Akol Koor Kuch among others.

The visit is aimed at reviewing the Juba Peace deal and political situation in the country following the resignation of the Prime Minister Abdullah Hamdok recently.

Reports indicates that situation there has remained tense and protesters have continued gathering in several cities as of yesterday in the first wide scale demonstration since Abdalla Hamdok announced his resignation as prime minister.

The rallies are the latest in a series of protests since Sudan’s armed forces, led by General Abdel Fattah al-Burhan, staged a power grab on October 25, sparking international condemnation.

Tut Gatluak is expected to meet with the head of Sudan Sovereign Council and his deputy to find ways to reach a framework agreement on ending the crisis.

“We came after what had happened in Sudan, there was an agreement but we were surprised by the resignation of the Prime Minister”, Tut spoke to media upon arrival in Khartoum.

“We came to see the ongoing arrangements in Sudan, because Sudan is our country and its security and stability is certain to us”, Tut says.

Tut added that, “President Kiir sent us to discuss with the Head of the Sovereign Council and his deputy and then to consult on implementation of Juba Peace Agreement.”

The military and civilian political parties, known as the Forces of Freedom and Change Coalition, had shared power since Omar al-Bashir’s removal in April 2019.

The October military takeover however upset the fragile transition to democratic rule and led to relentless street demonstrations across Sudan.

More than 50 people have so far been reported killed and hundreds wounded in protests triggered by the coup, according to a tally by a Sudanese medical group.

Civilian parties and neighborhood resistance committees have since organized several wide scale protests to demand full civilian rule, under the slogan “no negotiation, no partnership, no legitimacy”.

Hamdok, a former UN official seen as the civilian face of Sudan’s transitional government, was reinstated in November last year amid international pressure in a deal that calls for an independent technocratic Cabinet under military oversight led by him.

That deal, however, was rejected by the pro-democracy movement, which insists that power be handed over to a fully civilian government tasked with leading the transition.

Tut’s delegation is also expected to listen to security situation report in the border areas after recent clashes by a splinter group of the SPLM/A-IO with forces loyal to the First Vice President Dr. Riek Machar in Upper Nile state.

The talks will also incorporate in clashes and attacks by the Misseriya tribesmen in Abyei and Aweil areas respectively.