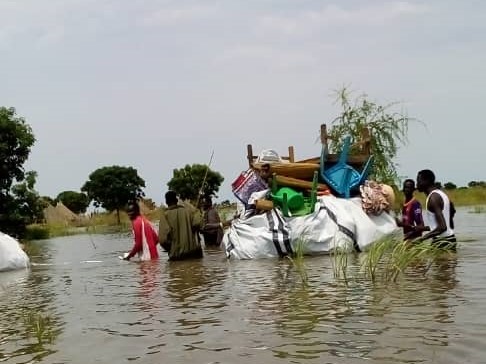 Youth help a family move to a higher ground in Fangak, Jonglei State, on Thursday, October 7, 2021. Local authorities say over 20,000 people are homeless after their villages submerged in flood waters in Fangak County | Credit | Courtesy

Over 630,000 people have been affected by the flash floods in 27 counties across South Sudan.

This is according to the latest reports by the UN Office for the Coordination of Humanitarian Affairs,

It says Jonglei and Unity are the most affected states – accounting for 58 percent of people affected by the flash floods.

“As of 7 October, more than 623,000 people were affected by flooding in 27 counties across eight states since May,” writes UNOCHA in its September Humanitarian Snapshot released on Thursday.

It states that the number of people in dire need of humanitarian assistance went up in September.

Schools, homes, health facilities, and water sources are also reported to have been destroyed.

Furthermore, physical access remained the challenge for humanitarian organizations to assess and respond to the needs of flood-affected people.