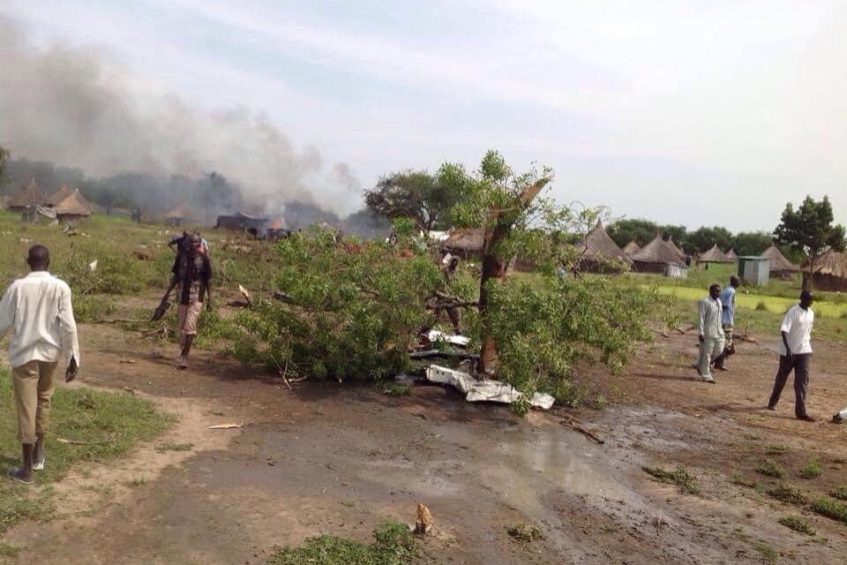 Scene of the crash that killed all onboard/Courtesy

The director of the South Supreme Airlines has backtracked on his earlier pledge to compensate the victims of the Pieri plane crash.

In March, a commercial plane registered as HK 4274, belonging to businessman Ayii Duang Ayii killed at least 10 people after it crashed in Pieri area in Uror County.

Officials said the plane that was returning to Juba via Yuai and Pibor took off but took a dive and crashed a few minutes later.

Those who died include two children, six women, and two pilots – a South Sudanese and Kenyan.

President Salva Kiir directed the Ministry of Transport and the South Sudan Civil Aviation Authority to suspend the airline operations.

In response, the Director of the South Supreme Airlines, Ayii Duang, assured the families of the victims that his aircraft had been insured by an international company.

He promised, on state television SSBC, that the families would be compensated.

This week, some family members of those killed in the plane crash said they have not heard from Ayii or the government since that pronouncement.

A former legislator of the defunct Bieh state, Hon. John Kil, who lost his wife Nyamuph Buk in the plane crash, said they never got a condolence message from the South Supreme Airlines and updates on the steps being taken to compensate them.

“We are taking legal procedures against the company because it seems on one cares – neither the government nor the company,” Hon. Kil added.

Nyapeach Majur Malau, the daughter of one of the pilots who died in the incident disclosed that they are filing a court case against the South Supreme Airlines.

“I only wish for justice, not for only those who perished but for the families as well,” she told Eye Radio

He claimed some of the passengers were aboard the plane without the knowledge of the company.

According to Ayii, the South Supreme Airlines is not responsible for an incident that came as a result of negligence by the pilots or the passengers.

“If the pilots made a side agreement with the passengers without the knowledge of the company, it is not our responsibility,” he told reporters in Juba on Wednesday.

In March, the South Sudan Civil Aviation Authority said it would screen all airline operators in the country in an effort to alleviate recurrence of plane crashes.