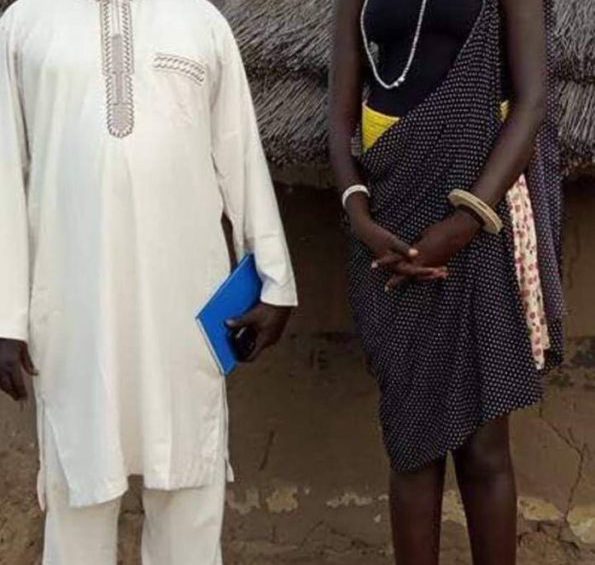 Elizabeth Nyalong stands beside a suitor in Lakes State

Several wealthy men are competing for a 17-year-old girl in Eastern lakes state, with one man willing to offer over 500 cows and 3 V-8s, the minister of information of Eastern Lakes has said.

According to Minister  Abel, Elizabeth Nyalong Angong Deng’s father who was a member of parliament in the then former Lakes state died some years back.

The relatives agreed earlier this month that she is “mature” to found a family.

“The family sat down in October this year and announced that everybody who is interested in her is now officially allowed to come and tell us how many cows he wants to give us and then we will see and agree as a family.”

Pictures circulating on the social media shows contestants pose with her next to a hut.

The minister said among the suitors is the deputy governor of Eastern Lakes State, David Mayom Riak and Kok Alat, a tycoon from Jonglei – who owns a bank and many other businesses.

Abel added that the bridal competition over the teenage girl is tense as members of different clans are contributing the bride price for their sons.

“The first person who came was a young man of 30 years old, he is called Mawut Agroorok with 210 cows”

He said among them is the deputy governor of Lakes State, David Mayom Riak.

“Honorable David Mayom Riak, who is also a very tall man, the same height as the girl…counted 240 cows.”

The minister said business tycoon, Kok Alat, a resident of Bor, has made the highest price.

“This tycoon from Bor, called Kok Alat has already given 2 Toyota Land Cruiser to the family, 1 to the mother, 1 to the stepfather because the father has died. He gave out 2 motorbikes, 1 to the executive chief, Deng Rom, who is the brother to the girl. He also promised the family to pay 500 cows.”

Mr. Abel said according to the Dinka culture, the cars are not part of the dowries, adding that they are considered as gifts to in-laws.

He said along the beauty of cows, personalities of those proposing do play a very important part in the marriage.

South Sudan Transitional Constitution recognizes that anyone below the age of 18 is a child. However, on marriage, it stipulates that one has to be of “marriageable age” without defining the age.

Among the Dinka and Nuer culture, someone becomes of marriageable age when they are initiated at the age of 16 or 17.

In South Sudan, customary law is in operation and thus such a person is considered an adult by customary law.

However, the competition for Elizabeth Nyalong, which kicked off this month, has generated mix reactions among social media users – with some arguing that she is too young to be a wife.

Child marriage is a formal marriage or informal union entered into by an individual before reaching a certain age, specified by several global organizations such as UNICEF as minors under the age of 18.

The minister of information in Eastern Lakes said that the state government has been trying hard to ensure girls such as Elizabeth go to school.

“We have been in embarking to the right to education, especially the education of girl child, but we are facing it very tough in our area. Nyalong’s father is educated but still, she could not go to school and with our people, education of girls is something that is seen to be destructive.”

He said that efforts to change the mindset have not been successful due to the cultural practice.

“They said those who are going to school will become prostitutes that they don’t have good behaviors, and they can’t make good housewives and responsible women. So the only value they put on them is the value of cows, not education.”

Farmers demand 10 percent in next budget