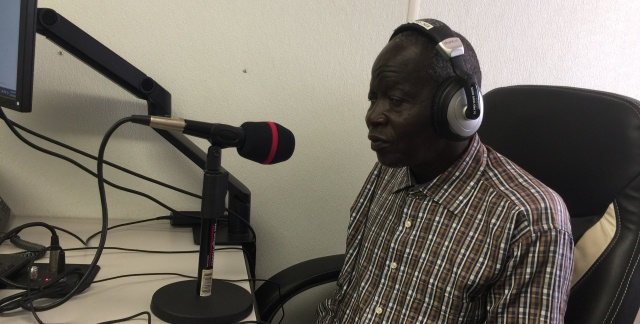 Edema Eriku at Eye Radio studios during an interview on October 6, 2018

Have you ever stumbled upon a visually impaired headteacher who has not let any obstacles take a course of his faith or any other disadvantaged person who uses his disadvantages to elevate others?

Well, meet the first South Sudanese blind headteacher who has not let his disability limit his leadership skills.

Despite, South Sudan’s history of seemingly never-ending war, Mr. Edema Eriku, the head teacher of Rajaf School of the blind has not allowed his condition to prevent him from his fight for equality.

During an interview with Eye Radio’s Rosemary Wilfred on the Big Story, Tuesday, Mr. Eriku patiently waited to answer burning questions about the perceptions and challenges that disabled people go through on a daily basis.

“I was born with a vision but I became blind because of measles when I was twelve years old. That is how I [developed] my disability. By then, there was no transport and dispensary,” he said.

Due to war and inadequate facilities, he was taken to Juba for treatment. However, it was “too late, and I had already lost my sight”.

“But it was too late and then I was taken back. Then from there the war broke out. I went to Uganda and I was taken to a mission to just get a baptism,” he said.

During the first Anya’nya One War, his father was killed by Sudan Armed who captured his mother in an area near Nimule.

His elder brothers sought refuge with him in Moyo, Uganda. This enabled him to join Moyo Girls’ Primary School after being encouraged by a missionary, Sister Laura.

After that, he completed his senior secondary school certificate at Iganga Secondary School. He proceeded to Busoga University for a degree.

A year later, he was enrolled at a teachers training college in Bulawayo, Zimbabwe.

His skills did not go to waste. He taught in a school for visually impaired students in East Africa and later returned to Juba to teach at Rajab Education Center.

He said, “The center is a rehabilitation center. We used to collect visually impaired students from all parts of South Sudan. We trained them for 9 months. After the training, we would return them home.”

Many visually impaired students have completed diploma course from Juba University and Khartoum.

Some of them are employed as teachers and others as social workers at Rajab Centre.

Eriku said that he is disappointed because there are very few visually impaired children who attend the school.

Parents do not send their children to school and that is why he is trying to raise awareness.

“Children with disabilities are not going [to school] anymore. So that is the disappointing part of it. I have been getting information from Torit; there are visually impaired children, but they are not going to school,” he added.

This year they have managed to train 17 students with limited teaching aid materials such as braille papers and packing brailler which are a challenge to acquire.

They have 19 teachers and three social workers. The school depends on non-governmental support to keep it running. They are currently operating at a temporary center at Bullock Eye Center Care.

Earlier, the ministry of gender built classes and kitchens and taught aid groups. The second phase is yet to be completed due to the civil war which stalled the programs.

The braille paper is used by the visually impaired person to feel white dots which form the 26 English Alphabets.

New textbooks from the ministry of education will be launched soon, however, the ministry “has no funds” or access to machines that transcribe.

Eriku’s mission is to make the government recognize special education in the curriculum for teachers’ training. He is also appealing to parents to bring children from the age of 6 to his school for learning.

In recognition of the World Teacher’s Day (October 5), Mr. Eriku’s story is highlighted to recognize and acknowledge education as a key fundamental right.

All children are entitled to free education which should be inclusive to children with special needs.

According to a disability assessment survey conducted by the government in 2011, about 424,000 people live with disabilities in South Sudan such as eye diseases, polio and physical injuries from war and violent conflicts.

The report says 85 percent of persons with disabilities live in rural areas with limited access to basic services.