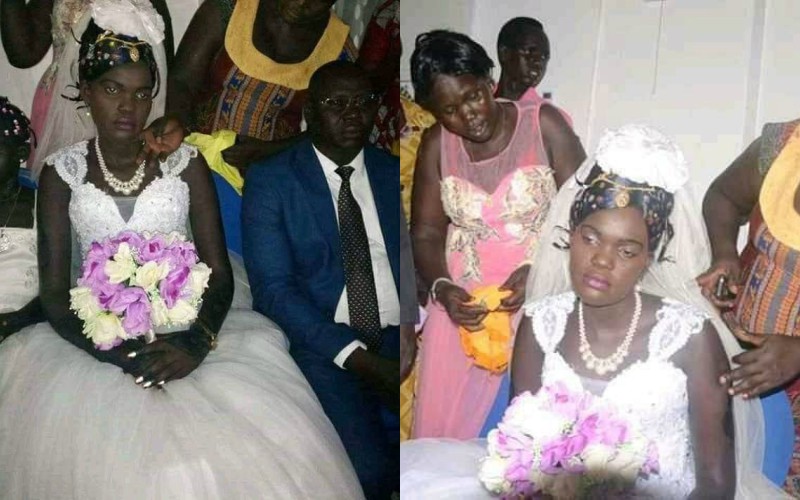 17-year-old Nyalong Ngong Deng visibly unhappy during her wedding in Juba after being "sold off" to the highest bidder in South Sudan.

In all of South Sudan’s customary law codes, marriage involves the payment of a bride price by a man and his family to the woman’s family.

The bride price can often run into millions of pounds, causing many relationships to break down or at worst create conflict between tribes or violence in marriages.

While in the past local chiefs have over-stressed the importance of paying the bride price, which gives the husband rights to his wife, they say they are now willing to consider reviewing it.

“The local chiefs are going to sit down and discuss on it and lobby for its [bride-price] reduction,” a local Chief from the Madut Buay from Bahr el Ghazel said during an interview on Eye Radio’s sister program our Our Archives.

Madut Buay says the high bride-price is fueling conflict in communities in the form of cattle raids to raise the bride price.

“It’ll be started in the state levels because expensive bride price can avoid majority of people from marrying which most times results into cattle raiding thus leading to loss of lives and also fuels conflict at grassroots and national levels,” he said.

A customary law called Waathalel regulated the bride-price between rich and poor families, limiting the bill to 36 cows.

For a new bride such as Dwoki Marline who married her husband after nine years of waiting – the high bride makes a woman feel like property to be sold to the highest bidder.

“First my husband was asked to prove that he was serious by paying 16 cattle which he did and then the actual bride price negotiation began,” she said.

After the negotiations began her husband was given her bride-price which she thought was too high.

She says while she supported the cultural practice as a custom which should be followed, she thought parents should consider their daughter’s happiness first.

“As a lady feels like you are being sold like an item by your parents and family, this high bride price is not right,” she said.

She noted that in some cases many men who intend to take a wife give up after they billed.

Similarly some women opt to run away and live with their boyfriends instead, instead of waiting for years for their partners to raise the money required for the bride price.

While there are few reputable Gender-Based Violence studies have been carried out in South Sudan – there is evidence of extensive domestic violence, early or forced marriages, wife inheritance, property ownership, child custody, arbitrary incarceration, female genital mutilation and sexual harassment and assault.

“Expensive bride price at time can make men mistreat their women, because they think they paid everything and now their wives are like already bought items,” she said.

The executive director of the Grand Debaters Association, Phillip Malaak Chol, says in some cases women and especially young girls opt to commit suicide, than face a life in an unwanted or forced marriage.

“There have been so many [cases of suicide]; these are some of the stories we get in our advocacy campaigns. Those that commit suicide, it’s a short way of ending their problems,” he said

South Sudan’s Bureau of Statistics census of 2011 states that 72.5% of the population is below the age of thirty more than 50% of them living below the poverty line.

Madut says this could cause many to see the bride-price as an opportunity to make an income.

Article 16 of the Universal declaration of human rights states that all men and women of full consenting age, have a right to marry and have a family regardless of nationality, race or religion.

The high cost of the bride price can sometimes infringe on people rights to love and live freely with their families.