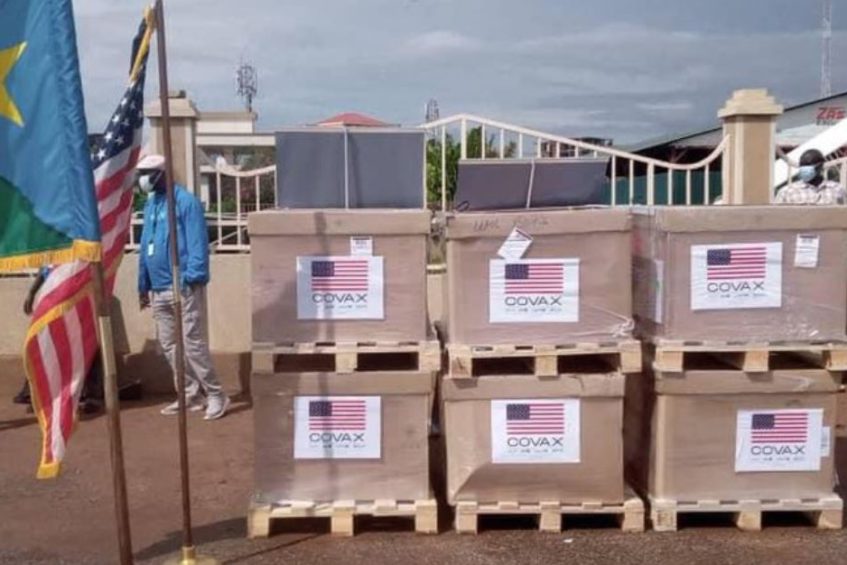 The Johnson & Johnson jabs arrived at Juba International Airport on Tuesday, September 14, 2021. The 150,000 plus doses were donated by the US government | Credit | Lasuba Memo/Eye Radio

The government has officially received a donation of more than 150,000 doses of the single-shot Johnson and Johnson vaccine from the USA.

The 152,950 doses – donated by the United States government via the COVAX facility – arrived at Juba International Airport this morning.

The jabs were received by the US Charge de Affairs – David Renz – and officials from the World Health Organization and UNICEF.

The jabs – to be administered across the country – have six months to expire.

It is expected to cover more than 150,000 people in the country.

“The J&J vaccine is important because it allows the governments to expands vaccination efforts to reach more people,” Amb. Renz stated.

“It requires only one dose and it is easy to transport and is going to protect more 150000 people in South Sudan.”

For his part, the deputy minister of Foreign Affairs, Deng Dau Deng, said:

“People of South Sudan are today grateful to see Johnson and Johnson in the country. It is a great opportunity for our people to get this vaccine as a way to expand the vaccination campaigns.”

Meanwhile, the minister of health called the general public, particularly the youth, to take the vaccines to protect themselves from the deadly Covid-19 delta variant.

However, Elizabeth Achuei cautioned those who already took the AstraZeneca vaccine against taking the single-shot John and Johnson jab.

On August 31, 2021, South Sudan received 59,250 doses of AstraZeneca vaccine under Covax facility to kick off the 2nd phase of Covid 19 vaccination in the Country.