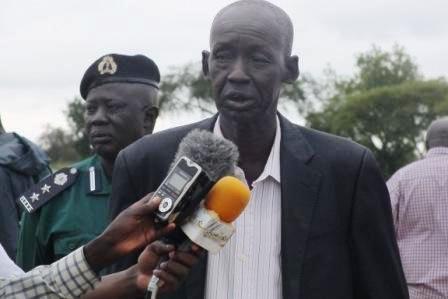 FILE: Dr. Agot Alier Leek in a past event. Courtesy

The Governor of Jonglei State says the Mayor of Bor town retains his position despite an order by the deputy governor to sack him.

On Wednesday, Dr. Agot Alier was fired from the position of Bor town Mayor after being dismissed from the SPLM party.

Jonglei state Deputy Governor, who is also the interim chairperson of the SPLM in the state, authorized the dismissal.

According to Antipas Nyok, Dr. Agot was removed from his position on the recommendation of a disciplinary committee.

He did not, however, disclose what Dr. Agot did to warrant his dismissal.

In reaction, Dr. Agot Alier told Eye Radio that his dismissal was illegal.

Now the governor of Jonglei State has come out to declare Dr. Agot Alier will retain his position as Mayor of Bor town.

In a statement on Friday, Denay Chagor said the SPLM issues are internal party affairs.

He stated that the power-sharing ratio in the peace agreement does not include the positions in the Municipal Council, as such, it is the governor to appoint any person to the position.

The governor appealed to citizens of Jonglei State to stay calm over the matter.

Dr. Agot was appointed Mayor of Bor Municipality earlier this year when the state government was established.

He also served as the Commissioner of Bor County.