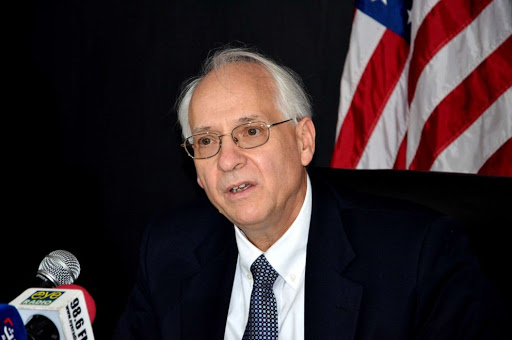 A diplomat says the government of South Sudan can still graduate the unified forces without necessarily purchasing new arms.

There are thousands of SSPDF, SPLA-IO, and Opposition Alliance troops at various training camps across the country.

They have been at the cantonment sites for nearly two years with some choosing to leave the camps over lack of food, shelter, and medication.

The government claimed it does not have weapons to give to the expected unified forces.

It argued that it can not purchase arms due to the embargo imposed on South Sudan by the United Nations Security Council.

The United States and the European Union have placed several sanctions on individuals in South Sudan.

The U.S Special Envoy to Sudan and South Sudan says the forces can still be unified and deployed without bringing more arms into the country.

“There is plenty of room for legitimate needs for a sovereign government to deal with its internal security problems,” Amb. Booth said in Juba on Wednesday after meeting with Vice Presidents Dr. James Wani Igga and Rebecca Nyandeng.

It revealed that the defense forces of South Sudan are reported to have 351,500 firearms.

Early this month, the Minister of Defense said the United Nations has preconditioned the lifting of the arms embargo on the implementation of security reforms stipulated in the revitalized peace agreement.

Angelina Teny stated that the UN Security Council recently carried out a strategic security assessment of the country where they pointed out the lack of a security strategy, resources, and funding which has impeded progress in the implementation of the transitional security arrangements, including the proper functioning of the cantonment and training sites.

“We need to focus on the constructive implementation of the peace agreement and the rebuilding of the country. And to try and find a way that we as long-time friends of South Sudan can best help South Sudan move forward for the welfare and benefit of the South Sudanese people,” the U.S special envoy concluded.