Kiir jets back from South Africa 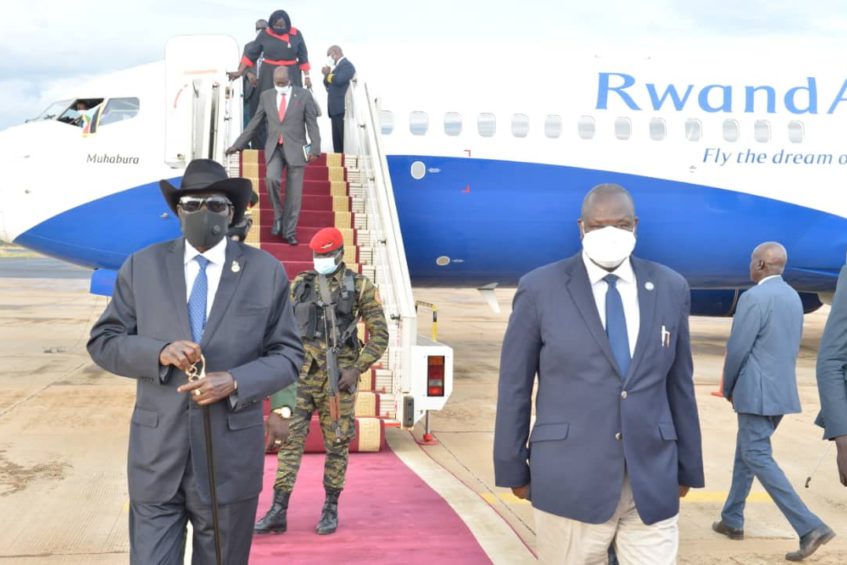 President Salva Kiir has returned to Juba Sunday evening after a three-day visit to South Africa.

On arrival at Juba International Airport, the President was received by the First Vice President Dr. Riek Machar and other senior government officials.

According to the minister of presidential affairs, President Kiir discussed with Ramaphosa the progress and challenges facing the Revitalized Peace Agreement, and the way forward to completing the remaining critical tasks.

“The two leaders were very harmonious in their meeting, President Salva Kiir was able to brief President Ramaphosa mainly on the area particularly connected to the relation of South Sudan with the United Nations and number two; the issues of the implementation of the peace process,” Dr. Marial told reporters at Juba International Airport.

The high-level delegation to South Africa included the Minister of Presidential Affairs Dr. Barnaba Marial Benjamin, the Minister of Foreign Affairs and International Cooperation, Hon. Beatrice Khamisa Wani, and the Executive Director in the Office of the President, Hon. James Deng Wal.

According to the minister of presidential affairs, the two leaders “further agreed to work to develop a partnership in the trade and investment sectors as well as to the peace and stability in the Republic of South Sudan.”

“With regard to United Nations, President Salva assured President Ramaphosa that he welcomes H.E Nicholas Haysom who is the United Nations Representative and UNMISS head in the republic of South Sudan,” Dr. Marial added.

Nicholas Haysom was appointed in January by the U.N Secretary-General, António Guterres to succeed David Shearer.