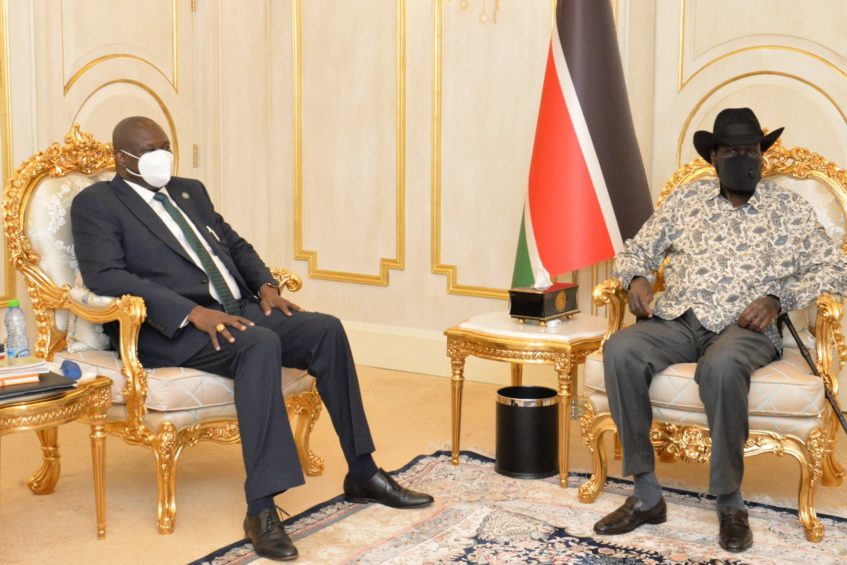 The president and the first vice president have instructed respective government agencies to speed up the graduation of soldiers under a unified command.

Salva Kiir and Dr. Riek Machar met on Tuesday at the State House to discuss issues that are slowing down the process of unification.

There are thousands of troops at various training camps across the country.

The soldiers are mainly from the SSPDF, SPLA-IO and the South Sudan Opposition Alliance.

Most of them have been at the training camps since 2019.

But some soldiers have deserted the sites due to lack of food, proper shelter and medication.

Last week, President Kiir and Dr. Machar directed all government and opposition forces to relocate to cantonment sites ahead of the graduation.

In their second meeting on the matter yesterday, the President and the First Vice President instructed government agencies to also address the logistical challenges at the training camps.

The meeting was attended by the Vice President for Services Cluster Hussein Abdelbaggi, Presidential Advisor for Security Affairs Tut Gatluak and the Minister of Presidential Affairs, Dr. Barnaba Marial Benjamin.

“The leadership agreed that they will meet again in order to conclude the process of the unified leadership of the forces,” Dr. Marial told the media.

It emphasizes that unifying the forces will provide security guarantees for the transitional government of national unity, unlike in 2016 when the forces were divided.