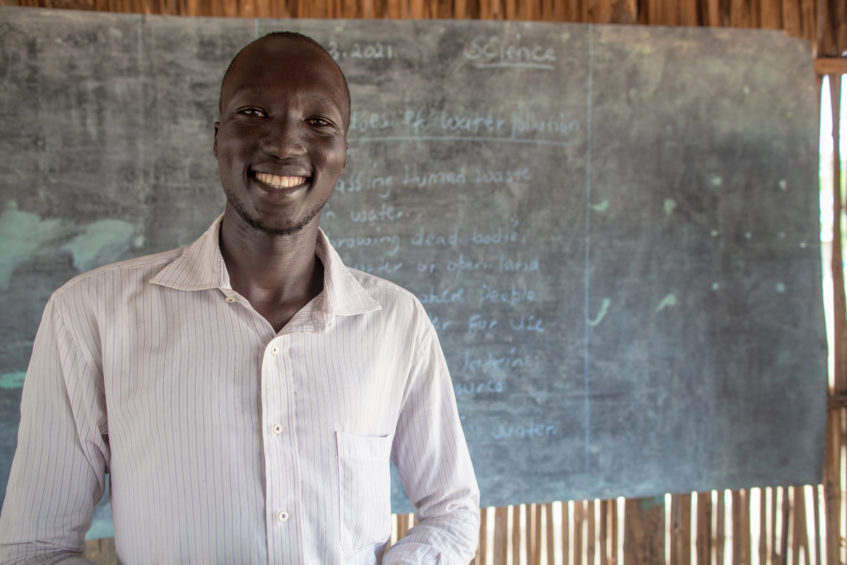 Ferguson Atak John is photographed in his classroom at Venus Star School in Juba, South Sudan on 10 March 2021. Atak and some of his fellow teachers keep teaching, thanks to motivational cash offered by development partners | Credit | Naftalin/Unicef South Sudan

The ministry of labor says it has effected the new salary structure for civil servants, with 100% increment.

On the 9 July, President Salva Kiir directed the Ministry of Finance and Planning to immediately increase the salaries of civil servants by 100 percent in its 2021-2022 budget.

He said the first priority would be given to doctors, nurses, teachers and those serving in the organized forces.

“We are ready to pay salaries for the three months – July, August and September,” Dr Julia Aker, undersecretary, told Eye Radio on Thursday.

In in the old structure, a nurse and midwife were earning between 2,000 and 5,000 pounds a month, while a doctor was getting 6,840 pounds monthly.

A foot soldier would receive roughly 1,500 pounds, an amount which could not pay for their food, housing, transport, among others.

But now with the new salary structure, a doctor who was receiving 6,840 pounds will now receive 13,680 South Sudanese pounds.

The Kiir administration is often criticized for failure to look after its civil servants, who are the worst affected by the economic crisis.

This situation persists despite the fact that the government receives hundreds of millions of dollars from oil production.

Several reports, including the latest – Oil or Nothing: Dealing with South Sudan’s Bleeding Finances – suggest that the administration misappropriates the country’s riches.

They say Kiir and his loyalists have amassed unexplained wealth, with majority owning homes and businesses in the region.

With the pound-dollar exchange rate standing at SSP 40,000 to $100 coupled with high market prices, observers believe the 100% increment will have no meaningful impact on the lives of the civil servants.