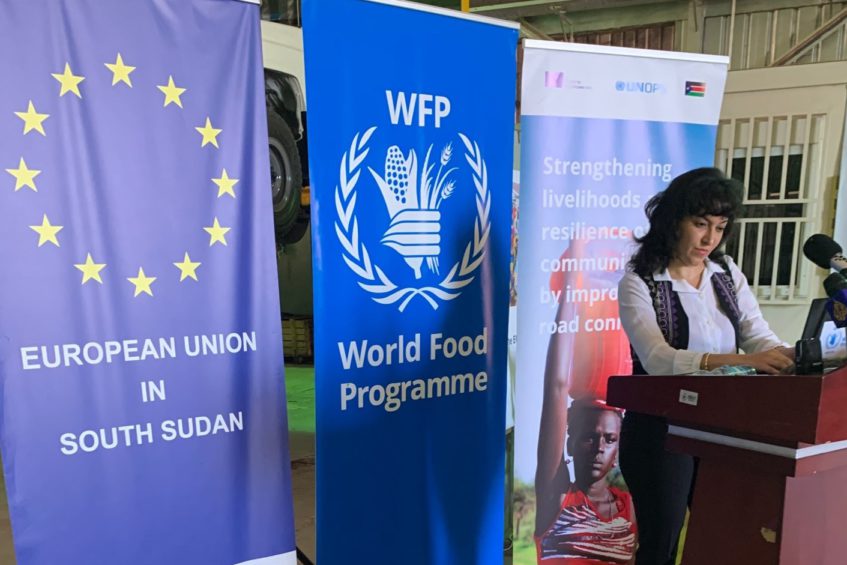 A representative speaks at a press conference in Juba on Friday, October 8, 2021 | Credit | Stephen Obur

The European Union has donated $41 million to facilitate feeder road construction and rebuild livelihoods in the rural parts of South Sudan.

South Sudan has one of the world’s most underdeveloped roads networks. The total estimated track length in the country is approximately 90,200km, which includes approximately 14,000 km of primary and secondary roads, and 6000km of tertiary tracks, according to reports.

The current interstate and international roads network consists of around 5,000km of gravel roads with approximately 300km of sealed roads.

Currently only one international road, the 192km stretch between Juba-Nimule on the Ugandan border is sealed.

The majority of other sealed roads are urban roads within the capital city Juba. All other national, interstate and urban roads consist of badly or non-maintained dirt roads.

The World Food Program (WFP) and the United Nations Office for Project Services (UNOPS) will implement the road construction project.

“UNOPS welcomes the much-needed funds from the European Union to support resilience building activities, improve infrastructure and reduce isolation in remote areas with agricultural potential,” says UNOPS in a statement issued a while ago.

WFP will receive $26 million to scale up its livelihoods and resilience projects that will benefit nearly 100, 000 people in Northern and Western el Ghazal Sudan states and parts of the greater Upper Nile State.

While the UNOPS gets $15.4 million to construct 115 kilometers of feeder roads, two priority bridges and provide water, sanitation and hygiene or WASH.

“WFP believes that empowering communities to produce their own is fundamental in our common fight against hunger,” Matthew Hollingworth added.