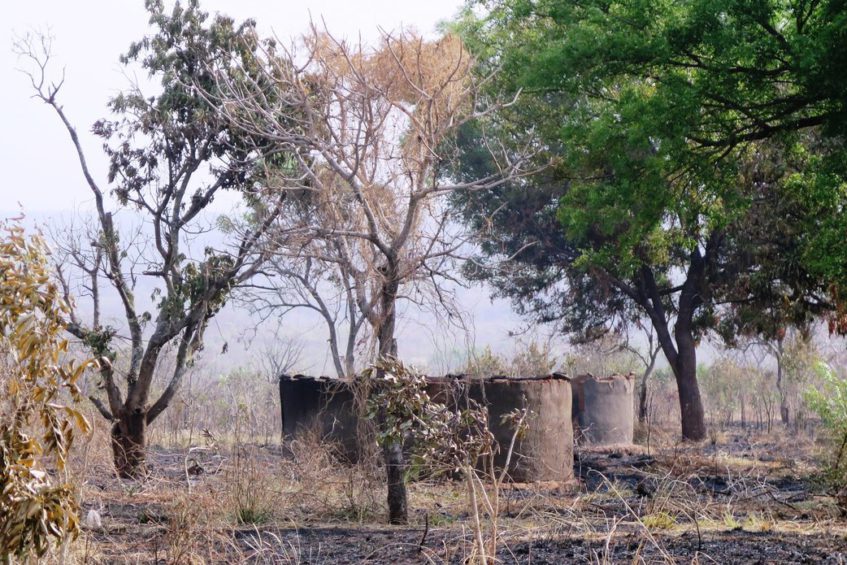 A destroyed hut in Moli on Juba - Nimule road. Credit/UNMISS

The Paramount Chief of the Ma’di community has warned against the alleged illegal sale of Ma’di land to investors along the Juba – Nimule Highway.

According to Angelo Vuga Morgan, they have received reports of illegal land occupiers auctioning community land in Fuli between Mugali and Nimule, and parts of eastern Nimule.

Chief known as Lopirigo says they have in possession documents indicating that some individuals and the government of Torit State were planning to allocate land to investors without the consent of the Madi people.

Chief Vuga revealed that multinational companies such as TRADEXIA of Dubai has been promised portions of land to build tourist centres in Fulli and a Diary farm in Nimule.

Several Non-governmental organizations and private companies have also reportedly applied for land in the area.

But Chief Muga said such allocations are being done at a time when over 90 per cent of the Ma’di population is in refugee camps in the neighbouring countries.

“Presently 99% of our Madi population has fled the country and are now refugees in Uganda and other neighbouring countries. It’s strongly advised that no investors should accept the allocation of land to them by some unscrupulous individual or authorities,” said Lopirigo of Ma’di Community, Angelo Vuga Morgan.

The population along the Juba – Nimule road were displaced by the 2016 violence.

Vuga who was also the former Ambassador of South Sudan to Zimbabwe affirmed that any allocation of Ma’di land to potential investors is in total regard of the constitution which says “all land is owned by people and regulated by the government.” He said the land being sold-out are private lands.

“That allocation will be revoked by the indigenous community when they return from exile. We advise you very strongly to suspend such request so that the investors in question will not lose the trust and good relationship with the community,” he warned.

The constitution says community land shall include all lands traditionally and historically held or used by local communities or their members. They shall be defined, held, managed and protected by law.

In response to the allegation, the Governor of Torit State, Tobiolo Alberio Oromo dismissed Vuga as an anti-development.

“A politician is a politician…the majority who are here wants investors to come and invest in their land, but there is an individual politician who wants to hold development hostage in South Sudan and Torit in particular,” Tobiolo asserted.

However, the Council of Minister in Juba on Friday asked Tobiolo to reverse a decision to allocate a piece of land on Mount Gordon, in Nimule, to a private company that sought to construct a university on top of the mountain.

The constitution allows the government to manage and dispense the use of public land which it describes as; all land owned, held or otherwise acquired by any level of government as defined by law; and all land which are not otherwise classified as community or private.

The Commissioner of Pageri County, Emelio Igga Alimas accused Ambassador Vuga of being out-of-touch with the needs of the Ma’di community.

“The ambassador is not in the country, he is in a refugee camp…the language he speaks is the language of opposition…. [he] should remain where and not affect the development our people want,” he said.

According to the UN Mission, homes along the Juba-Nimule road are largely deserted.

It said beyond Amee Junction in Pageri County, what remains are damaged schools, health centres, and tukuls with charred or missing roofs – all testament to the destruction that has visited the public and private property, including the offices of the County headquarters.

UNMISS also reported that the Ma’di community, indigenous of Pageri County, who fled the area to Uganda are yet to return home, despite repeated calls by the government for them to do so.

In this regard, the constitution prescribes that communities and persons enjoying rights in land shall be entitled to prompt and equitable compensation on just terms arising from acquisition or development of land in their areas in the public interest.

Last year, Torit State government and UNMISS organized a peace conference to find out what is preventing people from returning home from refugee camps in Uganda.

The natives of the areas in Pageri and Magwi said they were uncertainty over the presence of the army in their areas and the presence of cattle that are still roaming the land that the Madi farmers traditionally cultivated in.